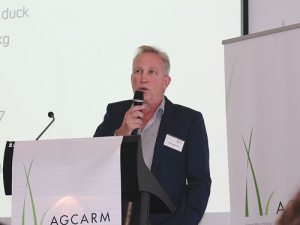 He says the chicken meat industry has grown between 3.8 and 9% each year for the past five years.

“Growth has been phenomenal,” Brooks told the Agcarm summer conference. “I have seen recent figures where red meat consumption has dropped in NZ, but for chicken meat we’ve grown consistently for 25 years -- probably 3% or more growth year on year.”

He says in NZ the chicken industry is vertically integrated, as it is around the world.

“It is the reason why since WWII chicken has surged as a protein source worldwide,” Brooks explains.

Tegel has slightly changed its model, but previously held a shareholding in the importer of the birds. It owns those birds. The day-old birds are sent to the farm.

Tegel supplies veterinary services, it has feedmills which send feed to the farmers, nutritionists and livestock managers, a truck fleet and it does the processing and selling. The company knows up to a year ahead approximate numbers needed throughout the process.

Brooks says the industry controls its inputs and outputs in a way other sectors – such as red meat – do not.

While NZ has not been a big exporter of chicken it is growing; Tegel’s strategy is to have 25% of  production going to export.

We have always exported to the Pacific Islands and now, “to the great annoyance of the Australian industry,” NZ is allowed to export chicken to Australia.

The United Arab Emirates is another big market and Japan is small but growing.

Free range in meat chickens started much later as a market than free range in eggs, but is growing fast and is now up to 20% of production, says Brooks.

Meat chicken here is barn or free range; it has never been in cages in NZ.

Like the meat industry, the layer chicken industry is in “absolute boom times”.

The industry produces at least one billion eggs annually, with 9.5% growth in consumption in the last year, says Brooks.

That industry has a few big players and 100-110 small free range operations with a couple of thousand birds. A commercial farm in this country is defined as 100 birds or more.

The systems are cage, a colony cage (a much bigger cage with 20-60 birds with a nesting area, perches and scratch pads), barn and free range.

Free range is now about 20% of the market and cage is 75% and – contrary to what a lot of people understand – the cage market is growing.

Chicken prices on the rise

New Zealand poultry supplier Tegel will raise its prices from this month.

An unusual feature of egg producer John Greene's Lakeside Free Range chicken farm, near Lincoln, is that the outdoor forage areas are planted in trees.

The current bird flu outbreak in Britain is a reminder of why it is important for New Zealand to maintain its biosecurity standards, says the local poultry industry.