Farming the Chathams: the tyranny of distance 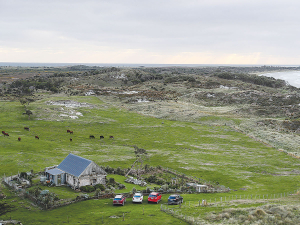 Low fertility soils and the tyranny of distance limit farming’s potential on the Chatham Islands.

Like a small scale model of the challenges New Zealand agriculture faces being so far from its main markets, farmers on the Chatham Islands are far enough from the mainland to make shipping inputs in and livestock out a marginal exercise.

An Australian coined the phrase ‘the tyranny of distance’ but it certainly applies here.

Rural News took the 2.5 hour flight on Air Chathams’ Convair 580, a graceful 1960s turbo prop. We came courtesy of Holden who were celebrating their 65th anniversary with an SUV adventure on Chatham Island, the main island in the scattered group of 25 islands. It’s not a cheap flight, so most of the non-human freight, including livestock, goes by ship.

To ship livestock the 860km due west to the South Island, the Chatham Islands Shipping Company charges $22.90 per lamb or ewe, $53.81 per ram and 52c/kg for live cattle. On top of that, farmers sometimes get underdone stock finished on the mainland before it goes to the works, cutting more out of the already slender margin.

Locals say things like “you farm for the lifestyle, not the money” and while that’s probably true, no-one farms to go broke. So targeting better lamb prices, say, on the shoulders of the season, is not just smart – it’s necessary.

Your options are limited farming low-lying islands way out in the Roaring Forties, blasted by salt-laden winds that rust out your gear and stunt tree growth. It’s a long, long way to the nearest Farmlands or Wrighties store.

A travel story in a 2016 copy of the Manawatu Standard recounts a yarn by an old Chathams local about how his dad once sent him “down to the boat” for more fencing staples. He came back two years later with a box of staples. Poetic licence or not, you get the point: it’s isolated.

The land is not very fertile and shipping fertiliser in to boost production is unlikely to pay off.  They no longer have an abattoir on the island. The last meatworks closed in 1994 so live export is the only option.

Agriculture is listed as the biggest employer on the islands but this includes fishing and forestry. Statistics NZ figures show that in 2016 farming (including forestry) earned $4.77m for the island, while fishing earned $18.56m.

The sea is the big obstacle for farming and the big opportunity for fishing, easily the main economic activity on the island. It accounts for 40% of the jobs on the islands, farming 14%, transportation 9% and tourism 8%. Incidentally, the second biggest job creator is government and public services at 20%, but don’t be misled by that figure – the Chathams have fewer unemployed and more self-employed than the mainland average. You make your own way.

This place is famous for blue cod, paua and crayfish. As luck would have it, we arrived on the very day the crayfish season opened and enjoyed all these delights of the sea, served with a big helping of Chatham Island hospitality at the Chatham Hotel and again at the splendid Admiral Lodge, both owned by members of the Croon family.

Many of the crayfish hauled up during the season will be live exported straight into Asian restaurants.

The blue cod is filleted and frozen then sent to the mainland, or gutted, chilled and sent direct to export markets in Australia.

The island has its own seafood processing facilities.

Owners of fishing quota risk their lives to earn a quid, but have seen some good times over the years, perhaps contributing to the interesting statistic of highest Harley Davidson ownership per capita in New Zealand. (That’s still only about 26 motorbikes, and where you’d ride them is questionable).

Farms number 48, of which 20 are described in the book Chatham Islands, First to See the Sun as “relatively intensively farmed”. Eight are extensive grazing properties and the rest are small holdings. While the book says 45,000ha is farmed, only 20,000ha is described as “improved pasture”.

Soil fertility is a limiting factor: only 18% of the soils are classed as having moderate fertility and only 0.3% high fertility.

Some have said farming output here has not reached its potential, and the farms being actively farmed do stand in stark contrast to the ‘less intensively farmed’ properties where dense gorse and feral emu flourish. The idea of a more intensively farmed Eden once again crashes into the tyranny of distance. The shipping rate for a bulk commodity (stored indoors) is $241 per ton. That blows the cost of a ton of superphosphate out from about $320 on the mainland to $561 landed on the Chathams.

Everything costs more here: electricity is twice the mainland average cost per kWh. Many generate their own power with diesel generators. Petrol and diesel prices are respectively 1.6 times and 1.25 times the NZ average. And a box of fencing staples takes two years to arrive.

It is likely a low intensity farming model will persist, which seems to suit the rhythm of the islands just fine.