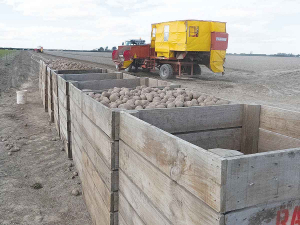 Despite warnings from the NZ potato sector, Agriculture Minister Damien O’Connor claims there’s no evidence of a surge in potatoes or frozen potato chips imports from the EU.

Agriculture Minister Damien O’Connor told Rural News there’s no evidence of a surge in potatoes or frozen potato chips imports from the EU.

“This isn’t something we’re seeing,” he says.

Potatoes NZ, the umbrella body for the $1b industry, is warning that a dump of EU potatoes and frozen chips into NZ would cause prices to plummet and could decimate the industry.

But the Government is indicating that it’s not keen to hinder trade agreements between NZ and the EU.

“While the Government would always support the use of New Zealand grown potatoes, these are commercial decisions for importers and businesses using fries,” says O’Connor.

“We’re a trading nation and we benefit greatly from our trade with other countries. Products flow between countries under normal commercial arrangements.”

“If New Zealand’s markets were flooded with these ‘cheap as chips’ potatoes it would be devastating to the industry and could see a major disruption to growers’ decisions about what they plant for this year’s crops.

“We encourage the minster to listen to the industry and to seek dialogue with them so they can get solutions that meet their needs.”

NZ processed potatoes account for 55% of NZ potato industry value and 85% of all fries eaten in NZ are from locally grown potatoes.

However, the potato fries business has taken a major hit during the COVID-19 lockdown, both here and overseas.

Potatoes NZ chief executive Chris Claridge says this has led to the complete collapse of potato prices in major production centres, in particular the EU.

“This will shortly lead to extraordinary price reductions in frozen potato chips from the EU,” he says.

The EU currently has approximately 2.6 million tonnes of surplus frozen fries that could soon end up in NZ and other countries.

“If urgent steps are not put in place to prevent it, New Zealand is likely to be swamped by imports of frozen potato chips at those extraordinary prices.

“That, together with the existing impact of the current pandemic, will in turn cause the New Zealand potato-growing and potato-processing industries to suffer severe and prolonged damage.

“This may lead to potato growers planting alternate crops and in turn lead to a shortage of New Zealand grown potatoes, which given New Zealand’s reliance on potatoes as a source of food, will represent a serious risk to food security.”

Meanwhile, New Zealand producers of frozen potato chips have built significant stock levels and are already having to deal with an oversupply of raw potatoes.

Claridge says, as a result, contracts with farmers for future potato production will be for reduced volumes, at lower prices.

He says the Government must help ensure local demand is first and foremost met through the supply of locally produced potato chips.

“Achieving that outcome will require some level of government intervention to dampen imports for a limited period of time.”