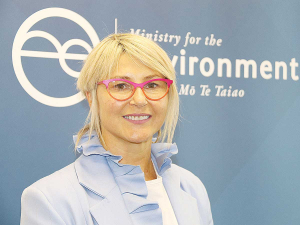 Secretary for the Environment Vicky Robertson warns highly productive land is at risk of becoming unavailable for growing fruit and vegetables due to housing developments.

Much of New Zealand’s best vegetable growing soils are being eaten away by housing and lifestyle blocks, which will increase people’s food bills, a new report warns.

The Our Land report – by Statistics NZ and the Ministry for the Environment (MfE) – says the area of the country’s most highly productive land that is unavailable for growing food because it’s been lost to housing increased by 54% between 2002 and 2019.

Secretary for the Environment Vicky Robertson warns that without action, fresh fruit and vegetables could get even more expensive.

Robertson says continuing to grow food in the volumes and quality New Zealanders have come to expect, depends on the availability of land and quality of the soil.

“Once highly productive land has been built on, we can’t use it for production.”

The report points to ongoing development of flat, fertile land on the outskirts of Hamilton, Tauranga, Nelson, Christchurch and Auckland, saying flat-land housing is a cheaper proposition for developers than building on hilly, less productive soil.

It’s not only traditional subdivisions that are crowding out food growing. Residential development of lifestyle blocks is also fragmenting fertile land, especially in Canterbury, the report says. In 2019, an Environment Aotearoa report said lifestyle blocks nationally had been growing at an average of 5,800 new blocks a year since 1998.

The Government has consulted on a National Policy Statement that would direct councils to better protect top-notch soil when considering zoning and development. MfE says this is expected by the end of the year.

The Our Land report calls for increased urban density to meet demand for new housing, without pushing food crops further away from population centres.

Horticulture NZ has called on the Government to urgently act to protect land for food production, in the wake of the report.

“This situation simply isn’t good enough, considering that the primary production sector is the backbone of the New Zealand economy and only 15% of land is suitable for food production,” Horticulture NZ chief executive Mike Chapman says.

“The Government must act now to retain remaining highly productive land. Once houses have been built on it, that soil is lost forever.”

Chapman warns that this is an issue that has the potential to comprise New Zealand’s ability to feed itself, fresh healthy food.

“You only have to drive south out of Auckland to see that this very thing is happening to the highly productive, unique soils around Pukekohe, just as it is happening across the country.”

Chapman believes that unless something done is to arrest the continuing loss of land for food production, locally grown produce is under threat.

“If New Zealand is not careful, buying healthy, locally grown fruit and vegetables will become even harder,” he warns.

Chapman says the Government needs to act now to protect our ability to grow healthy, nutritious fruit and vegetables in New Zealand.

OPINION: The recent Our Land 2021 report released by the Government is a wake-up call.

Concerns raised about the serious conflict of interest of a key Ministry for the Environment (MfE) staffer involved in the controversial freshwater reforms has led the ministry to implement a new system to mitigate future issues.

Having declared in July that all farm plastics sold in New Zealand will have to be recycled or reused, the Ministry for the Environment has made two major grants to help this policy become a reality.