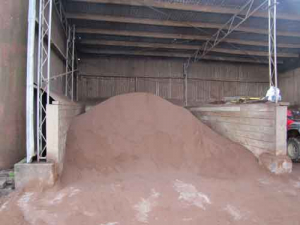 This was despite the wet winter/spring, the damage done by pugging, the very dry early summer and severe drought in Taranaki, and the mass incursion of low quality summer grasses into pastures after Christmas.

How could this be, I wondered, given that the pasture-harvested figures I was seeing from the farms I monitor were showing significant drops in feed grown per hectare.

Last week it all made sense when I read that record amounts of PKE had been imported last season, despite the higher prices farmers were having to pay for it.

As in the last few years, farmers used PKE as the ‘get out of jail card’ when the season turned against them.  The variability in pasture growth over the past few years has become extreme and, rather than develop resilient farm systems that account for such variability, some farmers simply planned to ‘dial a truck’ if they felt they needed to.

Some commentators have argued that the ease of feeding PKE has led to sloppy farming systems where any perceived feed pinch is fixed by adding PKE to the diet. In many cases this has led to poor pasture quality and reduced pasture harvest.

Times have changed: as of September 1 this scenario will end for Fonterra suppliers, who will be penalised whenever their FEI enters the C or D range.

The days of using PKE to cover poor feed planning are over as farmers won’t have the same freedom as in the past to simply plug the gaps with PKE.  Farmers need to plan now to ensure they have enough feed on hand to cover any potential feed shortages the season may cause.

Farmers have several options for covering the risk of not having enough feed this season. These include:

- Get a realistic understanding of how many cows the farm can carry on home-grown feed in an average season.  An example of this is as follows: assume the farm grows about 16tDM/ha/yr of grass and maize silage.  Assume also that the 475kg cows produce 420kgMS/cow.  From DairyNZ’s Facts and Figures book, a cow that size doing that production will need about 5.2tDM/cow/yr.  At this, the farm needs to be stocked at about three cows/ha.

- Allow for the ‘non-average’ season.  Several data sets measuring long term grass growth invariably see home-grown feed yield varying by 4 - 8tDM/ha/year.  Based on the numbers in the above point, a farm could be over- or under-stocked by 0.75 - 1.5 cows/ha, depending on the season.  This is where stored feeds such as maize silage come into their own.  The beauty of such feeds is that if you have surplus feed you don’t need to feed it.  It can stay in the bunker or stack to be fed when you do need it.

- Grow some of your own feed on land you manage, to average down the price of bought-in feed.  Cost of feed has become a critical factor in profitable, resilient systems.  Growing a crop of maize on paddocks that need renewing can result in a feed price of about 20c/kgDM, even when you take into account the pasture forgone from those paddocks.  If bought-in maize silage costs 32c/kgDM in the stack, and if we assume the farm grows half its own maize needs, then the average cost of feed drops to about 26c/kgDM.

- Contact your local maize silage or maize grain supplier now to secure this season’s feed needs.  Very rarely will the contract price of maize silage in the spring be higher than the price of other supplementary feed options during a summer feed shortage.

It has been my experience that planning feed needs always pays off. I believe that the upcoming restrictions on PKE will ultimately result in more efficient and more resilient farms.

• Ian Williams is a Pioneer forage specialist. Contact This email address is being protected from spambots. You need JavaScript enabled to view it.