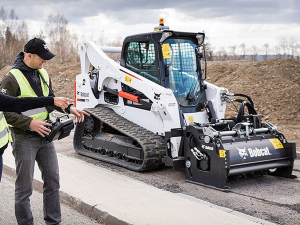 A remote control Bobcat enables the popular machine to be worked in the usual tight spots -- with nobody in the operator seat.

The manufacturer is reckoned the first to introduce such a system as original plug and play equipment, and it’s compatible with the company’s selectable joystick controls.

Remote control especially suits extreme environs where a machine-bound operator would otherwise be at risk, eg in flood, mud, rockslide or forest fire.

Doosan Bobcat loader project manager Jiri Karmazin says the system can be used in many applications.

“It allows users to focus on visibility and communicate with their surroundings without being in the cab.

“There are also obvious benefits for workers in situations where noise, vibration or dust may bring harsh risks.”

As well as allowing direct sight of the work, the system increases the loader’s versatility with attachments like angle brooms, breakers, buckets, snow blowers, trenchers or wheel-saws, where the operator have to work in reverse for much of the job.

The controller is easily portable and quickly mounted or dismounted from the loader in a few minutes, leaving the machine in its original form.

Remote control kits are housed in a rugged waterproof enclosure, and have a 20 hour battery, a dedicated access password and a 9cm colour LCD display that can show fuel level and temperature and other key data.

The operators has control of all key functions including the throttle, creep and float controls, speed management and, of course, the emergency stop button.