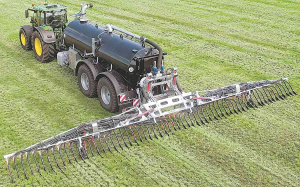 Kiwi dairy farmers tend to be lagging behind the northern Europeans in their handling of dairy effluent.

The Europeans realised long ago that efficient effluent use would go far in replacing bought-in fertilisers.

These help reduce the amount of nitrogen lost to the atmosphere as ammonia, while also addressing the problems of odour and complaints from neighbours.

German specialist Vogelsang, a big player for years, has taken another step in placement accuracy, so reducing crop contamination and improving plant uptake of nutrients.

New skid technology for its Blackbird trailing shoe linkages embodies a beak-like point said to ensure an even flow of slurry while also penetrating the soil surface more easily.

The Blackbird series also uses its maker’s precision distributor/macerator — the ExaCut ECQ, located at the centre of the boon structure. Its large internal diameter and oversized distributor plates keep the slurry moving, under control and distributed more accurately.

The unit also has a large maintenance port at its heart, allowing access to all internal components so that servicing can be done without dismantling the distributor, the outlet cover or the outlet hoses and feed lines.

Also, because the rotor runs at lower speed, it needs 50% less power, and exerts less pressure on the cutting blades and inside the distributor, all these factors extending the service life of the unit.