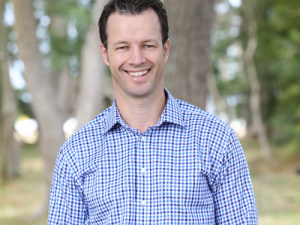 Mackle told Dairy News that while the milk price is holding up at present, no one can predict what it might be in the future. He says the big issues are water quality, how the Government’s plans may impact on the sector, climate change and zero carbon proposals.

“There is also the issue of immigration and we are working with the Government on how we can make that work in a more sensible way for migrant workers and for farmers. Naturally M. bovis is also a major ongoing issue for us,” he says.

The rising popularity of alternative foods are another issue which Mackle says affects the dairy industry. But he says he’s a firm believer that there will always be a place for pure natural food and it’s up to the sector to farm in a way that puts industry at the top.

He says some of this is due to the heavy debt burden some farmers are carrying from past bad seasons and their fears about some of the effects new Government initiatives may have on farming businesses.

“We need to push the positives because we have a very good story to tell,” he says.

Mackle rates last season as about eight out of ten, despite the issues farmers had to confront. He again points to labour problems in the sector and the ongoing criticism of the dairy industry by the news media.

“Some of the criticism is simply incorrect and this affects farmers,” he says.

To counter this DairyNZ is running a campaign with the news company NZME to help the public to understand that while dairying is partly to blame for water quality issues, many of the problems also occur in urban areas with no cows.

The ‘Vision is Clear’ campaign is described by Mackle as a “call to arms” to all NZers to tackle the problem of water quality. In recent weeks, full page advertisements highlighting what dairy farmers are doing for the environment have appeared in NZ Herald. He says the campaign is not finger-pointing or blaming. Other material is being made available on the issue.

“We have long recognised that the support of NZers is critical for our future and farmers themselves know this better than anyone. They live in the community so it has always been important to engage and tell the story about the progress that has been made,” he says.

DairyNZ has a very large water quality science team and is a key part of the solution, Mackle says.

“It is obvious to us that dairy cannot do it alone and we need to have a collective effort in NZ to solve our water quality challenges where they exist,” he says.