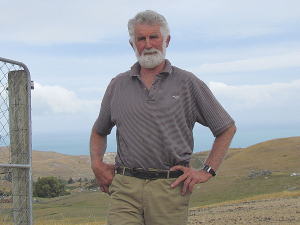 The Canterbury TBfree committee chair Malcolm Gilbert has retired after 15 years in the role.

Gilbert, who farms deer and goats in North Canterbury, says the committee has helped grow awareness of wildlife disease vectors and their potential to spread bovine tuberculosis (TB) rapidly.

“It’s been a big part of my life. I got involved in 1992, when it was the Canterbury regional animal committee.”

He recalls the early TB control effort was ad hoc and depended on local farmers.

“There was no national strategy, so we started voluntary farmer vector control groups which encouraged herd owners to manage and control their own properties. At its peak about 40 farmer voluntary groups were involved.”

Gilbert oversaw 21 of these groups.

“It was only circumstantial evidence we had at the time, but the Animal Health Board (AHB) backed us and provided resources and funding for toxins and traps.”

The farmers persuaded the AHB to research the impact of the large ferret population on the TB cycle in arid North Canterbury. In 2000 the AHB planned a regional strategy, blanking out areas from the coast to the hinterlands, after which livestock infections fell as more farmers killed vectors and promoted TB management in their areas.

“We targeted hunters as we discovered pig waste was another route for ferrets to get infected and this was a threat to the blocks of land we had under control.

“We supported pig hunts and informed hunters about wildlife vector control and how they could help.”

“There used to be 167 infected herds in our region, so we’ve progressed.”

Still, we have a way to go nationally. It’s important not to forget the “hard times” so that the younger generations stay on track to reach those milestones and objectives.

“That’s the challenge, as farmers tend to focus on the here and now.”

Gilbert says the Mycoplasma bovis response could benefit from following the model of the TBfree committees. He says farmers should help make decisions.

Gilbert is a salmon fisher and hunter and will continue deer velveting for a few years.