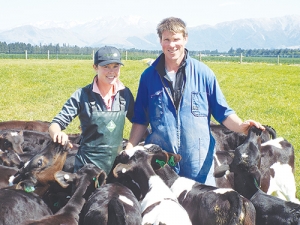 Rebecca Langley and Andrew Furzeland with their calves.

It's a long way to Methven, particularly if you come from Devon in the UK or Wairarapa, as have Andrew Furzeland and Rebecca Langley.

The pair recently set up a calf rearing business called Homelands Farming in the shadow of Mt Hutt.

After working in the area for some years they bought 66ha that had been leased for cropping for ten years, settling in May.

Their business model goes backs to basics, working on the premise that giving dairy calves the best possible start results in high quality animals reaching production age then going on into herds to pay their way.

Rebecca cites the four 'C's' they try for – consistency, colostrum, cleanliness and comfort.

Calves arrive at 4-7 days old and leave when they reach a target weight of 95kg. On arrival the calves are inspected for general health, navels are checked, feet disinfected and they are weighed. They are then housed in a new purpose-built complex of two 68 x 9m buildings split into 32 pens, and capable of holding 512 animals.

The calves are housed in light airy pens with lie-down areas with wood shavings treated weekly with disinfectant, and a concrete stand-off area cleaned and washed off daily.

Animals are fed colostrums twice daily via compartment feeders for the first six weeks and depending on meeting weight targets are moved to a once-a-day feeding as they move outdoors.

Regular weighing tracks each calf's progress and yields reports to their respective owners. Working with the farmer and local vet enables them to tailor health plans to best suit the calves.

In one season Homelands has reared 1100 calves. They are reared on contract to local dairy farmers, companies wanting dairy heifers for export and FirstLight Foods for Wagyu beef production.

Losses during the season have not exceeded 1% thanks to the rearers' attention to detail. While most calves are moved on at target weights, Andrew and Rebecca retain some on a Dec-May grazing contract which complements their system and reduces the stress of stock movements.

Commenting on the future Andrew says "our key focus is that we stay in control; we don't want to grow so large that we lose the attention to detail that makes the difference".

He says they strive to find premium contracts fair to both parties, but reflecting the above-average time they put into the calves. Their goal for next season is to continue to develop systems to allow them the most time with the animals with the aim of developing them to their full potential, and to build strong working relationships.

Meanwhile plenty of work remains to be done on the new block, including replacing about 12km of fencing; 5km has already been done. Add to that re-sizing paddocks and installing an irrigation system and there's plenty of work for this ambitious young couple, although they will need to take a break for their wedding in April.