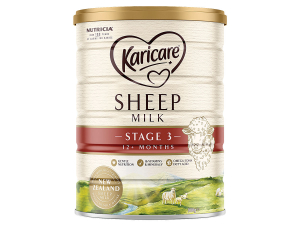 Milk from free range, grass fed dairy sheep is now supplied by Maui Milk to Danone from its two farms running 6000 ewes on the western shores of Lake Taupo.

The company is offering multi-year contracts to new conversions in greater Waikato with the aim of doubling milk volume next season.

The Karicare brand is a leader in Australia and New Zealand, says Nutricia.

The Maui supplied milk is processed at Innovation Park in Hamilton.

“Comparison with a typical Waikato dairy farm shows a better return per hectare, especially on smaller farms in the 50-80 ha range,” he said.

“The system is all grazing, no barns are required and the lactation is shorter than for cows. A lot of farmers are also attracted because the environmental footprint is similar to traditional sheep and beef farming.

“Conversion from dairy cattle is low cost and we are offering multi-year contracts at a payout equivalent to $3/L. We can supply pregnant ewes during winter so a farm can dry off the cows in autumn and be milking sheep in spring.”

Maui Milk was formed five years ago to satisfy demand for alternative milks, particularly in Asia where many people find cow milk hard to digest.

The company highlights the natural advantages of sheep milk which contains much higher levels of most nutrients than either cow or goat milk.

Maui chairman Peter McGilvary explains that whole milk powder sold under the Maui Milk brand was a stepping stone during the establishment phase and an expanded product range was always expected.

“The opportunity to supply the early childhood nutrition market is exciting,” said McGilvary.  “The educated, affluent consumer wants grass fed dairy for their children and they focus strongly on environmental sustainability and animal welfare.”

Gatley says the company has made huge strides in farm productivity improvement.

“Progress has been spectacular. Until recently it was impossible to breed a modern dairy sheep in NZ because the genetics simply did not exist here. That all changed when we imported semen and embryos from Europe.

“Sheep can milk as yearlings and they have multiple offspring.

McGilvary says the company is working on complementary products to sell under its own brand and is buoyant about the prospects.

“Whatever form the product takes, we see grass fed sheep milk as the perfect fit for ‘brand NZ’. It’s what we’re famous for -- grass, sheep and milk.”

For Nutricia, its toddler sheep milk product innovation responds to growing demand among consumers in Australia and NZ for toddler formulas based on alternative sources of milk, such as goat and sheep milk.

“As consumer preferences continue to evolve it’s important that we, as market leader in Australia and New Zealand, are able to cater accordingly. Also, this launch is an opportunity to serve other consumers with similar tastes in the region, and who value NZ’s renowned agricultural and sheep farming heritage and the country’s natural environment.

The milk for the launch of Karicare Toddler Sheep Milk is sourced from Maui’s two farms.

Christchurch people are too conservative in their tastes, says a Canterbury sheep milking pioneer who has stopped producing bottled sheep milk because of modest sales, Covid, and his own advancing years.

Rewards of milking sheep starting to flow through

A Waikato family among the first to enter the commercial dairy sheep industry is starting to see the rewards of their hard work as they come to the end of their second season.