Relief at weekend on the farm 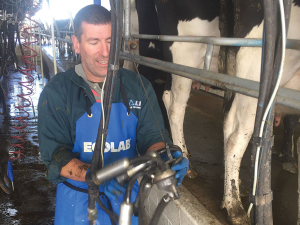 Holidays may be few and far between in the dairy industry, but Southland farmers David and Angela Spedding recently enjoyed a weekend away as winners of Ecolab’s inaugural ‘What a Relief’ programme.

Ecolab aimed this at enabling two winning dairy farmers to get off their farms for a weekend of mental and physical relief.

Four staff from Ecolab’s Invercargill office – with 67 years combined dairy farming experience – took over the Speddings’ owner operated farm near Winton while they enjoyed their break.

“As breeders and milkers we are on site 24/7, tending to our animals and ensuring high quality milk production all year round,” said Angela Spedding.

“I was so pleased for my husband and I to win ‘What a Relief’, which enabled us to take a break knowing our facility was in safe hands. Without Ecolab it would have been many more months before either of us would have had a chance to relax.”

The couple – just the two of them – enjoyed a weekend at a plush hotel in Queenstown in late April, their first break from milking since the season began.

She said Ecolab’s care of the farm was “absolutely wonderful”.

Pacas called the programme a great way of engaging with the community.

“Given that dairy is an important business for us we’ve always been supportive. To succeed in business you’ve also got to support local communities, which Ecolab has done over many years.”

Pacas said Ecolab has sponsored the NZ dairy community for many years by supporting rural schools, community and sports clubs and industry awards.

‘What a Relief’ may become an annual event, he said. “It’s a beautiful way of giving back.”

The US-headquartered multinational operates in hygiene, sanitation and water treatment in many sectors including dairy where it markets teat sprays and other products for dairy shed sanitation.