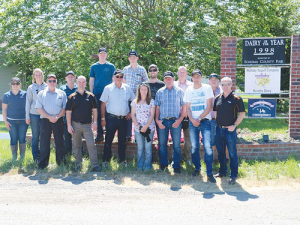 New Zealand dairy farmers visiting California dairy farms last month were surprised at how far behind US farms were in efficiency and adoption of technology.

For example, one farm the Kiwis visited was milking 1600 cows in a double 25-head parallel dairy. So it took two 10-hour shifts to milk the herd.

Although there is room in the parlour to expand the current system to 40-head, it won’t be done until the herd expands as there is enough labour at $10/hour to continue as is.

Despite this, on farms visited attention to detail was high, with extremely low mastitis levels and a herd average of 45L/cow on one farm, thanks to a diet monitored daily.

Shawn Sands, who farms at Aka Aka, said the tour showed it paid to “focus on doing the basics right”.

“Ensuring that milking policies are being followed correctly by all milking staff can cause a dramatic decrease in SCC and mastitis.

“The farms that paid their staff well and treated them as part of a team had remarkable staff retention.”

Most farms were also pasteurising all milk fed to calves to minimise the amount of bacteria and disease calves were exposed to.

“This could be something for NZ farmers to look into, particularly with the current outbreak of M.bovis,” Sands says.

• Alltech funded Stephen Cooke’s attendance at the Alltech ONE Conference and trip to California.