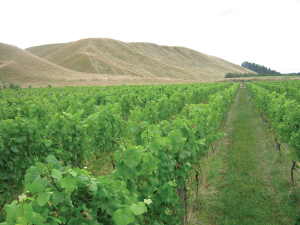 Te Hera Estate Vineyard is small by anyone’s standards and its output is destined to become even smaller this year after a spring frost wiped out approximately half of its potential grapes for the 2019 vintage.

Spring frosts are an unfortunate fact of life for vineyards on Te Muna Road, nine kilometres west of Martinborough township, which is home to the five hectares Te Hera Estate.

Owner John Douglas says his windmill is the sole reason the vineyard is a viable economic proposition, but that the flavours of the grapes and wine make the risk all worthwhile.

“We always have frosts. It is a constant issue, particularly here in Te Muna where we all have frost protection, mostly windmills or helicopters, depending on the size of the vineyard,” he says.

“The reason this latest spring frost just became too cold for the windmills to become effective was that the inversion layer was really high, which made things tough.

Normally you have a cold layer of air that windmills bring the warm air above to raise the temperature to about 2 to 2.5 degrees but it was too cold for
the windmills to be effective. I was measuring sometimes minus 3.”

Douglas says that he would have no crop at all in extreme weather conditions, if it wasn’t for frost protection.

He understands that the general loss in Te Muna after last year’s spring frost was about 50 per cent overall.

“There are parts of my vineyard that are okay and parts that are just devastated, so it’s all a bit disheartening really.

“I’m slowly getting over my devastation and working with what I have got. It’s difficult to say exactly what the percentage loss will be for the 2019 vintage, but I’m guessing somewhere between 50 to 60 per cent loss overall.”

Others in the Wairarapa were also affected by spring frosts in 2018, including Martinborough Vineyards.

Winemaker Paul Mason says he estimates a relatively modest fruit loss of between five and 10 per cent, which was a lucky near miss, given the severity of the frost.

“It was our coldest frost since November 2006. Some parts of town got hit fairly hard   whilst other parts were untouched. Te Muna and Lake Ferry Rd (south of town) in particular were very cold,” says Mason.

“It was a strange night. Forecasts were for a low of 1-2 C and it had been a warm still day, so we weren’t expecting it to get that cold. At about midnight our warning alarms activated and by 3am our wind machines were going and the helicopters were up.”

Like Douglas, he says the relatively high inversion layer made it more difficult than usual to frost fight.

“Our helicopter pilot had to fly higher as the morning drew close, just to find warm air.”

Mason considers Martinborough Vineyards lucky to escape relatively unscathed, compared to others in the region.

“It really depended on
where your vineyards were though, but for us it was mostly superficial with damage to vine leaves and, to a lesser extent, shoot tips.

Douglas says: “There are always risks when you’re growing  grapes for a living but the upside is the wine quality.”