Pyramid Valley: Stepping up to a legacy 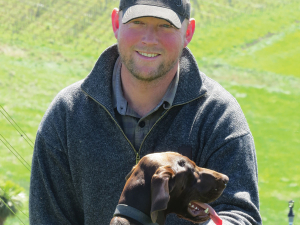 From the wildflowers rolling down its slopes, to the limestone and clay entwined beneath its vines, it's easy to see why Huw Kinch is smitten with Pyramid Valley.

"It's a privilege to live in such a beautiful place and bring up my children here," says the Winemaker and Estate Manager of this Waikari Valley site. "It is a very unique vineyard, with such character. It's a once in a lifetime opportunity really."

The North Canterbury land was bought by Mike and Claudia Weersing in 2000, then transformers into an extraordinary organic and biodynamic vineyard that earned a global following of devotees. Claudia and Mike were passionate about the land, and "Pyramid Valley evokes so much passion in the consumers", says Huw, who knows well the "apprehension" in the market when the land and label was sold in 2017 to a partnership between American billionaire Brian Sheth and Steve Smith MW.

Pyramid Valley has just released the first of Huw's wines, with the 2019 Botanicals Collection sent to Australian reviewers in October, with New Zealand following last month. Each of the Botanicals is named for the dominant meadow plant it grows in, with the Lion's Tooth Chardonnay sprung from a field of dandelions, and the Angel Flower Pinot Noir grown amid yarrow, while plum-hued Fumaria officinalis surrounds the vines for Earth Smoke Pinot Noir.

The reception to the new wines has been "realy good", says Huw. "The site is louder than a single person and that is what Mike would want." A winemaker's job, especially in a place like this, is to try and capture the best interpretation of site and season, he says. "The clarity of the place is what I like to think about."

Natalie Grace, Brand and Marketing Manager of Aotearoa New Zealand Fine Wines - which runs Pyramid Valley - says "really good" is Huw being "very humble" about the 2019 Botanical wine reception. "I wouldn't dream of putting words in his mouth, but phenomenal, incredible, exceptional would be a much better fit," she says.

A view of this land and its surrounding hills is a delight, but it’s what’s underneath that drew Mike and Claudia in 2020, following a long search for soils in which the clay and limestone have developed together, as in Burgundy. The active limestone running through Waikari begins in the North Island and stretches down to Waitaki, popping up in Kaikōura on the way.

It’s a rare find, but it takes a thick skin to grow wine here, “right on the edge of the climate”, says Huw. Being in a “truly cool climate” subregion allows him to make wines that are distinctive and reflect the soil, unmuted by the noise of swifter ripening. But it comes with constant cropping challenges, and Huw’s first vintage in 2019 was 80 percent down, thanks to three weeks of cold southerly rain during flowering. The 2020 vintage was “awesome” and then they were struck by frosts last year.

Those blows are softened somewhat by the Appellation Collection, grown on other vineyards, including Pinot Noir at Lowburn Ferry, also owned in a partnership between Brian and Steve, through AONZ. The collection has wines from other North Canterbury winegrowers, and a Sauvignon Blanc from Churton in Marlborough. This year that Churton Sauvignon is fermenting in an egg, which last year held Waipara Mendoza from 38-year-old vines. Meanwhile Huw is exploring the opportunities of a line-up of three-tonne concrete tanks, providing a neutral vessel with gentle temperature changes.

The eggs and concrete tanks are part of a winery built over the past year, bringing better temperature control and an array of fermenters, to capture the best expression of time and terroir. The shell of the build is simple – a kitset aeroplane hangar – but a stroll inside reveals investment in all the ways that matter, with a new de-stemmer, press and tanks. The new owners bring budget, but it’s not thrown around, says Huw. “The money is invested in high density vineyards and some really good winemaking equipment.”

On the hills, Huw has spent the past three years filling in the gaps between blocks, “which was part of Mike’s original planting plan”, he says. The Weersings planted 22,500 vines across 2.2 hectares, with 1 metre row spacings. Now there are 60,000 vines across 6.8ha, with the additional 38,000 vines planted at 1.25 metre spacing, to allow for interrow plantings that can be crimp rolled down across the meadow. “The hectarage doesn’t seem big, but there are a lot of vines in that area,” says Huw.

The new plantings are predominantly Chardonnay, with the variety now three quarters of the area, and Pinot Noir the remaining quarter. That’s flipped the past ratio on its head, but Chardonnay has proven to be the more consistent player, says Huw. “It’s an amazing Chardonnay site, there’s no doubt about that... Although I think it’s an amazing Pinot Noir site as well.”

The new plantings are predominantly Chardonnay, with the variety now three quarters of the area, and Pinot Noir the remaining quarter. That’s flipped the past ratio on its head, but Chardonnay has proven to be the more consistent player, says Huw. “It’s an amazing Chardonnay site, there’s no doubt about that... Although I think it’s an amazing Pinot Noir site as well.”

Biodynamics, which Huw sees as an organic version of regenerative farming, is about adopting a mindset of everything being interconnected, he says. “And every decision you make has influences on everything else.” It’s about farming microbes in the vineyard, he adds. “And if you think about winemaking, that’s all we’re doing… Managing microbes in the winery to make wine.”

Huw grew up in Australia and went to Charles Sturt University at Wagga Wagga to study wine science after finishing school. Vintages during study, in the mid-2000s, took him to various Australian wine regions, as well as California where he tried a Hawke’s Bay Syrah that drew him to New Zealand. Vintages at Trinity Hill with Warren Gibson and John Hancock boosted him into a flying winemaker job in the South of France in 2007. Those connections also hooked him into a job as Assistant Winemaker at Escarpment in the Wairarapa, working for 10 years with Larry McKenna, including the last two of transitioning to organics.

“My first vintage was a 12,000 tonne winery in Margaret River and I slowly went smaller and smaller,” says Huw. “My skillset allowed that because I am not a specialist in anything.” And over the years of working wide across a small operation, he’s increasingly connected to the cyclical nature of winemaking. “It starts each year when we prune and every decision from pruning all the way through – shoot thinning, fruit exposure, picking, and in the winery – are all winemaking decisions. To make wine you have to do it from the start.”

For all the new toys in the Pyramid Valley winery, it’s the vineyard that excites Huw most, as the root source of such distinctive wines. The biodynamics at play makes sure that source is enhanced and protected. “For me it is about observation and trying to build more biodiversity in the soils and have a healthier ecosystem.”