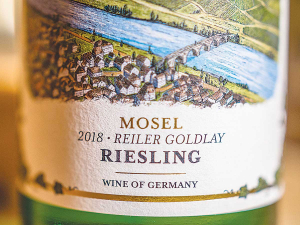 Joelle Thomson tells the story of how the Giesen brothers bought a vineyard in their homeland on the Mosel River.

The Mosel is often described as a fairy tale wine region, home to the steepest vineyards in the world, rising up from the banks of the eponymous Mosel River.

It’s also home to many of the oldest intact castles in Europe, the quaintest wine villages in Europe and, of particular interest to New Zealanders, the newest addition to one of this country’s most successful ranges of Riesling; Giesen.

This year the German born Giesen brothers added a Mosel Riesling to their range.

It was inspired by their father and grandfather, who were both Riesling drinkers and whose love of the grape and the region drew the three brothers back there to make their own.

The new wine will be released in early 2020. It’s called the Giesen Mosel Reiler Goldlay and the first vintage is 2018. It was made with grapes grown on a 120-hectare vineyard in the village of Reil, where the vineyards are on steep, slate soils in the cool southern German climate.

And it all came about via a chance meeting at the German wine fair, Prowein, in 2017 where they struck up a conversation with a young German winemaker, Tobias Treis.

“Tobias and his family are deeply rooted in Mosel where they own and run a multi-generational vineyard and their family has been making wine in Mosel since 1684,” says Alex Giesen.

“Like us, Tobias has a global outlook and, while he respects the region’s history and traditional winemaking techniques, he’s open to international trends and influence, so with a similar outlook it’s natural we enjoyed each other’s company.

“We remained in contact and within a few months of our return to New Zealand, Tobias was on the phone letting us know about a rare opportunity – a Riesling vineyard for sale in Mosel, within the village of Reil. Given our grandfather’s love of Mosel it didn’t take much convincing and our new wine is the result.”

Giesen describes the wine as having high minerality giving way to flavours of lime, lemon, melon and pineapple.

“It’s a perfect balance between minerality and tropical flavours thanks to its dryness and its firm acidity, which means it’s possible to age it for up to five years,” he says.

Alex and his brothers, Marcel and Theo, all say it was memories of their father travelling to Mosel with his father, August, to buy barrels of Mosel Riesling that prompted them to buy a portion of the Goldlay Vineyard from which to make their own wine in the region.

The first vintage was made by Tobian Treis and is a typically light bodied, intensely flavoursome expression of Riesling from the Mosel.

“The Giesen Mosel Riesling vineyard sits within the village of Reil on the banks of the Mosel River and picturesque Reil is a small village with a population of a little over 1200 and narrow winding streets lined with traditional half timber houses which are hundreds of years old,” says Giesen.

The property includes 120 hectares of terraced vineyards. Steepness is the name of the game here and there is an altitude difference of 150 metres from the top to the bottom. Average vine age is over 50 years old and vines are planted along many small terraces supported by dry stone walls. Needless to say, all vineyard work is by hand.

“Tales of our grandfather, August, a sommelier and hotel owner were legendary. Giesen’s August 1888 Marlborough Sauvignon Blanc is named in his honour.

“His two loves in life were steak tartare and dry German Riesling grown in ancient soils on the banks of the Mosel River. Kurt, our father, often accompanied August on buying trips through Mosel, where he acted as August’s guardian on more than one occasion, after he’d enjoyed a few too many Mosel ‘tastings’,” says Giesen.

To become owners of a Mosel vineyard is, he says, a happy coincidence of timing and heritage.

Creating a storm with Riesling

Benjamin Franklin once said that if you want something done, ask a busy person.