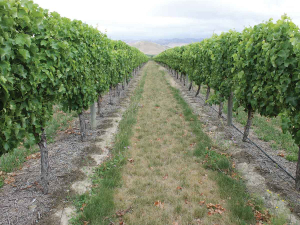 The sub surface irrigation on the left still shows signs of the irrigation working, but more water is going to the roots than to the surface.

The arguments advocating against sub surface irrigation are often over played, with the benefits ignored.

That’s according to Mark Allen from Allen Vineyard Advisory, who with 33 years of experience of placing irrigation drip lines underground has plenty of knowledge to call on.

Allen says the first time he installed sub surface irrigation was back in 1986, when he was helping develop a new vineyard in Hawke’s Bay. Unsure if the block would actually require irrigation, it was suggested they go for the cheapest option of tape, place it underground and monitor until they knew if it was really necessary. Then if needed, they could change the system later on.

“We were told it might last five years. Well it lasted 33 years. That pipe only just came out last year, after being laid underground back in 1986.”

He says he has helped lay around 500 hectares of sub surface irrigation in Hawke’s Bay, and around 100 hectares in Marlborough.

So, what are the arguments against the system? Allen says the negatives include; you can’t see it, so you don’t know if it is working, root intrusion into the drip lines, compaction of pipes, hard to repair and it’s costly to install and maintain. None of these are legitimate concerns he says, although he did admit that compaction of pipes is relevant in heavy, stony ground.

As for the positives, they are plentiful and often overlooked.

When an irrigation line is planted underground, there is no UV damage, no risk of it being damaged by sheep, rabbits or harvesters, no evaporation loss, no feeding water to surface weeds, direct delivery of water to the root zone. These are just some of his arguments.

As for the installation and maintenance costs, he says the savings per hectare are a huge incentive.

“It is cheap and easy to install. There is no wire needed, no jiffy clips and less labour costs installing. The rough figures for cost savings are $872 a hectare less to install.”

But perhaps the most notable advantage, especially moving forward, is the savings in water usage. Allen says because the underground pipe delivers directly to the root zone, without evaporation or intake from weeds on the surface, water savings can be as great as 30 percent.

“That is a huge potential saving on regional water resources.”

Install the sub surface irrigation after posting and immediately after planting, 150 – 200 mm away from the vine.

Select the depth according to cultivation, under vine mowing or herbicide. Range from 100 – 250 mm.

Risers, T’s and elbows can be buried.

At the strainer use an elbow fitting to bring the lateral up to 500mm. Attach a flushing cap. Exposed dripper can be used as indicators to check each line.