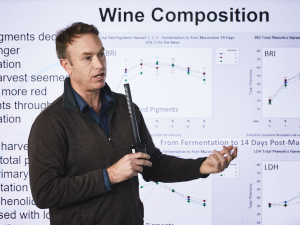 NMIT viticulture lecturer Stewart Field at the Bragato Research Winery open day, where he presented on a study into the effect of hang time and post ferment maceration on the quality of Pinot Noir wine.

Bragato Research Winery paraded its vintage 2021 trials and celebrated the science of winemaking at an open day at the Blenheim facility last month.

Covid-19 restrictions saw a limited number of local industry people attend, including grape growers and winemakers, but there was a nationwide virtual audience, thanks to livestreaming capabilities.

Tanya says the open day was an opportunity to let the industry see what kind of trials were being carried out at the institute. Some of that work was for industry suppliers, such as trialling products including yeasts and antioxidants that weren't available on the market yet. Other trials looked at the effect of undervine weed control options and how different loading on vines affected grape and wine quality.

The research winery, with its state-of-the-art facilities, is proving to be an outstanding success for the industry and feedback from those who have used the facility is extremely positive, says Tanya. "It is designed as a commercial operation with precise scale control - it is an amazing facility for anywhere in the world and is right up there on an international level... We can do trials from the grape through to the bottle."

Steward spoke about the trial he had headed, which studied the effect of hang time and post ferment maceration on the quality of Pinot Noir wine. The study, undertaken with Lawson's Dry Hills, aimed to produce a more elegant wine with better flavour and colour. Stewart and his students studied phenolic structure and ripeness in grapes in a Waihopai Valley vineyard, which involved continuous sampling at regular intervals after veraison. Students tagged bunches and each week collected and sampled them, weighing and testing each bunch and berry individually. A total of 9,000 berries were sampled.

A key finding was that sugar loading stopped 21 says after veraison as did berry weight, but brix levels kept increasing, probably due to dehydration, says Stewart. Pinot Noir wine was made with the first pick 31 days after veraison, a commercial pick 45 days after veraison and a late pick after 52 days. "Grapes were destemmed, cold soaked for four days, fermented, hand plunged then pressed," he says.

After an extended maceration, sensorial analysis was carried out by winemakers and staff from both Lawson's Dry Hills and BRI. It showed that red pigments declined with a long maceration and more time on the skin resulted in more phenolics. An early harvest resulted in high phenolics and lower quality wine scores.

Another trial carried out at the Bragato Research Winery, for Constellation Brands, was the co-fermenting of various fruits, including strawberries and pomegranates, with Pinot Noir grapes. Frank describes BRI as a "sandbox for innovation", and the trial resulted in a new product, Super Rosé, being made, marketed and sold in Australia.

The open day finished with a winery tour, so participants could inspect the facility which has been built on a scale and design not previously possible in New Zealand, says Jeffrey Clarke. "It is built to the highest quality, and is sustainable with a recycled water systems and solar panels." The 84 fermenting tanks allowed a wide range of trials to be carried out in tightly controlled conditions, he adds. "The feedback from our trials to date has been fabulous with industry going on to apply their learnings."