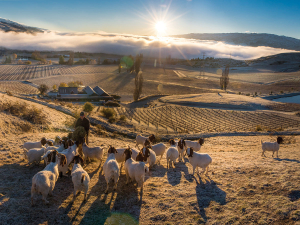 "They often fight, and they often have significant competing interests," says Felton Road's owner, using sequestration as an example. "If I am trying right now to sequester some carbon, I might be better off planting pines than natives." On the flipside, he's seen wine companies abroad "wave their hands in the air" for being biodynamic, while using heavy glass bottles, or spraying their vineyard using a helicopted to reduce compaction. "It's more nuanced than 'are we sustainable?'"

It's a balance Nigel has grappled with for the past 15 years, and is front of mind now the prestigious Central Otago winery has become the second New Zealand company to join International Wineries for Climate Action (IWCA). That collective's rigorous accountability standards will, for example, see Felton Road calculating the travel of wine tourist to and from its cellar door, and using an algorithm to glean the carbon cost of refrigerating their wines in personal and commercial cellars around the world.

Felton Road has been cutting emissions and growing environmental initiatives for the past 15 years, largely as a by-product of winemaker Blair Walter's abhorrence of waste. "For example, when we are pressing off our fermenters, they start with shovel and end with a spoon," says Nigel. "It's not a big spoon. It's a little spoon." One of Blair's rules is not to waste more wine at vintage than you can drink in a sitting, adds Nigel. "The idea is nothing is wasted. All of our lees goes to be distilled and we make brandy, and the pomace from the lees gets composted. There's literally no part of the wine process that isn't recycled, reused or composted."

There's no wastewater treatment facility, because "we never put anything down our drains", says Nigel. Water from the winery - invariably found pure in testing - is used to irrigate arid hillsides, where Boer goats graze on rose brambles planted by 19th century gold miners, who sought vitamin C from the hips. While many neighbouting farms now spray their roses, the Felton Road brambles are deemed a resource, feeding goats that in turn fertilise the pasture, allowing highland cattle to now graze these hills as well.

Felton Road has long packaged its wine in lightweight glass packaging, "before most other wineries", all cardboard is 100% recycled, and "we have an enormously finnicky waste management programme", says Nigel. "We measure everything that is thrown away in this company." That means just 1.4 tonners of rubbish went to landfill in the past year, which is less than a typical four-person household.

Again, much of that was not driven directly by carbon goals, but by Blair considering waste an "obscenity" says Nigel, talking of one example where the interleaves of bottle pallets are now sold to a local trucking company instead of being sent to landfill, in a triple win. Meanwhile 120 solar panels on the winery roof produce 60% of Felton Road's energy requirement, including for two electric cars.

It's significant progress, and makes the continued reduction of emissions, as is demanded by Gold membership in IWCA, very tough, says Nigel, clearly relishing the challenge. "We don't have many things we can play with."

Nigel has previously eschewed certification, "fairly horrified" by the option to offset emissions by buying credits in lieu of actual greenhouse gas (GHG) reductions. But the strict vetting of the IWCA - whose members commit to reducing GHGs, improving land stewardship, protecting biodiversity, and being socially responsible and locally engaged businesses - immediately appealed. "It forbids any kind of offsetting towards your carbon performance. If you are going to give a carbon figure, it is a carbon figure without offsets."

The IWCA's target of being carbon neutral by 2050 has strict parameters, with third-party verification of the three GHG scopes - scope 1 being direct emissions from owned or controlled sources, scope 2 indirect emissions from purchased energy and scope 3 all other indirect emissions in the value chain, including staff commutes and travel, and the movement of those cellar door guests. "Suddenly you realise that's a challenge," says Nigel. "That's what I love - they are on my wavelength."

He is inspired by the work of companies like Familia Torres, a founding IWCA member that has been battling the climate crisis for decades. "They have a greater commitment than any other winery I have looked at closely," he says. And he joins their ilk with some trepidation, given Felton Road has no "low hanging fruit" left to pick. "We have done most of the easy stuff alredy. So, we will be jumping on the thing in the fast lane, rather than the slow lane."

Cutting flights is one step, and the other is to buy more land and plant a forest, again balancing the concept of sustainability with climate action. "Is it feasible to grow something compatible to that ecosystem or not? We don't have those answers yet... There's a lot of research to be done and we want to get this right."

Clicking on to climate action

Yealands and a global effort to decarbonise wine

Greystone steps up to Toitu carbonzero

Pekin ducks diligently snaffle grass grubs on a Wairarapa vineyard, while sheep graze an array of species growing beneath the vines.