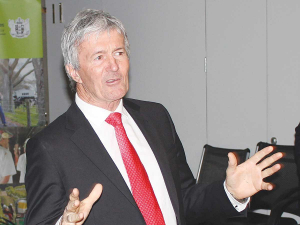 Trade and Agriculture Minister Damien O'Connor will head to Europe this year to tackle trade negotiations between NZ and the EU, and NZ and the UK.

He will be the first New Zealand cabinet minister to head to the northern hemisphere since the start of the Covid-19 pandemic.

As Rural News went to press, the final details of his trip were still being organised, but sources in Wellington suggest that meetings with top EU officials - including President Ursula von der Leyen, Trade Commissioner Valdis Dombrovskis and Agricultural Commissioner Janusz Wojechowski. He's also likely to have talks with ministers and officials in London.

While NZ is engaged in talks with both the UK and EU, the parties are dealing with what could be described as the easy bits of the agreements and have yet to lock horns on the real issue of concern to NZ - access for our primary exports.

The EU's Ambassador to NZ, Nina Obermaier, believes that negotiators from both sides are very optimistic that a high quality agreement will be arrived at in the not too distant future, but declined to be more precise.

Speaking at a function in Parliament, Obermaier noted that in the last round of negotiations, which have just concluded, a lot of progress has been made. However, no finality was reached on any individual chapter or specific area.

"I think what we have done in the last ten rounds is deal with the low hanging fruit in terms of issues and these have been harvested and now we are coming to the issues that require a bit more discussion," she told Rural News.

"We knew that in advance and there are no surprises. It is more than just agriculture, but of course there is an understanding that in order to land this agreement, NZ expects a revised market access offer from us around the sensitive issues of beef and dairy."

Obermaier says the reason for being reluctant to predict a time frame is because any FTA has to be finally approved by the 27 individual states that make up the European Union. She says, at some stage, the negotiators will come up with a draft agreement that will be put to the member countries.

"Then it will be about finding a balance between NZ's expectations on access and our own sensitivites," she says.

In terms of the UK FTA negotiations, an official report on the 4th round of talks contains such phrases as "chief negotiatiions provisionally agreed the outline of the whole agreement" and "both sides are working towards an agreement that will liberalise trade and promote shared values such as openness and sustainability".

However nice and diplomatic these may sound, the reality is that the two sides still have to thrash out a deal on the 'sensitive' issue of agricultural trade.

UK's High Commissioner to NZ Laura Clarke says she's pleased that the two parties have had another productive round of FTA negotiations over the last few weeks, which she claims is a testament to the real momentum on both sides to agree an ambitious deal.

In past negotiations of this type, and in a non-Covid environment, NZ politicians and officials would hav been heading to Europe on a regular basis, building relationships and lobbying potential supporters. The challenge for Damien O'Connor will be to effectively move into political speed dating mode and make his time count to get a satisfactory outcome on the FTAs - especially for agriculture.