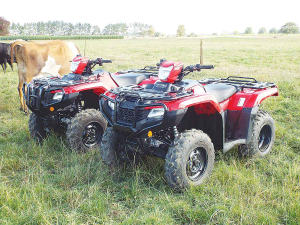 Honda’s move was brought about by changes to the minimum safety requirements enacted by the Australian Government in October 2019.

“The new standard is extremely disappointing for farm safety and the countless users who rely on a quad every day,” says director of Honda Australia, Robert Toscano.

Driven by the Australian Competition and Consumer Committee (ACCC), who require the compulsory fitment of CPD’s by October 2021, the initiative is centred on the use of aftermarket devices currently available, none of which appear to be built to any agreed common standards.

Toscano says the safety of its customers is paramount and Honda will never compromise on this.

“Safety standards must be evidence-based, in both criteria and testing methods, to internationally accepted standards,” he adds. “Honda has provided research to show the negative outcomes of the governments’ proposal, but unfortunately it was not considered, and we are here in this position today.”

Toscano says Honda will continue to advocate for safety measures the company believe are ‘proven’ such as mandating helmets, supporting ride training and preventing children under the age of 16 from riding adult sized quad bikes.

ACCC deputy chair Mike Keogh disputes a claim that it is too difficult for manufacturers to meet the required standards.

“We deliberately designed the standard around existing CPD’s. We didn’t specify an exact requirement, with the only proviso being that devices needed to meet or exceed the existing roll-over protection devices.”

This seems a little strange, as none of the devices currently available appear to be built to any recognised standard for design or manufacture.

Honda Australia claims that despite numerous recent coronial inquests, CPD’s have not specifically been recommended by coroners. However, Keogh says while this had not been ruled out, organisations more qualified in such matters should investigate what controls should be put in place.

Meanwhile, in New Zealand, Rural News understands there is likely to be a ministerial decision on the matter, prior to the upcoming election, with regulations in place by mid-2021.

It is understood the likely direction will recommend that the owner (PCBU -person conducting a business or undertaking) of the “mobile-plant” will have obligations to decide what type of crush prevention devices are suitable for their situation. This might be as simple as a safety helmet, which under the proposed regulations will be considered a CPD.

This will mean that a CPD will be able to range from a simple helmet to and aftermarket frame-type device fitted to a machine.

It is believed these proposals will be acceptable to NZ distributors of quads/ATVs.

However, they will continue to promote the need for initial and ongoing training, alongside legislation to prohibit under 16-year olds riding full size machines, and the compulsory use of good quality safety at all times.