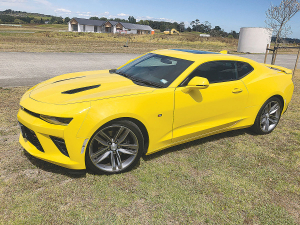 The new Chevrolet Camaro will satisfy the lovers of American muscle cars.

You wouldn't credit a 6.1L Chevy small-block V8 with a fuel economy figure of 7.8L/100km but that’s the figure displayed on the screen of the bright yellow Camaro that HSV NZ loaned us for a week.

Admittedly, it takes much restraint of the right boot to be that parsimonious, but incredibly it is do-able. When we first fired the car up the trip computer actually showed that the best and worst fuel economy figures over the last 100km were 7.4 and 18L/100km respectively. Expect it to average somewhere in the early to mid-teens depending on your driving style – still quite some achievement for a 339kW, 617Nm V8 capable of brutal acceleration.

Cylinder deactivation on a light throttle helps, transforming the LT1 V8 into a V4 when you’re just cruising, the only real clue being a ‘V4’ indicator on the dashboard.

We suspect economy won’t be top priority for buyers of this Chevrolet Camaro 2SS, re-engineered for the NZ and Australian markets by HSV, who have reinvented themselves since the demise of the Aussie-built Commodores.

So bugger the fuel statistics, let’s bury the boot and see how she goes. Bloody hell! Fast and furious is the answer, with a beautiful V8 soundtrack and a thrilling willingness to wind out in each of its eight gears to 6000rpm where it hits peak power.

It’s potent alright and will satisfy lovers of American muscle. It’s more than that though. The 4-wheel independent suspension with LSD and big Brembo brakes gives sophisticated handling to rival more expensive European cars. It’s probably too big to call a sports car — more a grand tourer — but the balance and grip impress.

On a long drive the firm ride you notice around town is no longer an issue, the suspension tune making more sense at speed, and the big seats remain comfortable even after a couple of hours at the wheel.

It’s well equipped, with a fantastic BOSE sound system, My-Link touch screen with smart-phone compatibility, wireless phone charging, climate control, a sunroof and more. It lacks some of the active safety and autonomous drive technology that’s available in some cars these days, but we suspect the typical Camaro driver is likely to find that stuff annoying and turn it off anyway.

Luckily, it’s got a rear-view camera, rear cross-traffic alert, rear park assist and blind spot warning. Lucky, because rearward visibility in this narrow-windowed beast is average at best. If you do decide to take it into town to do the shopping though, you’ll find it has a fairly decent sized boot. You could also fit a couple of kids in the small back seats -- just.

HSV has done a stellar job setting the Camaro up to drive on the proper side of the road. They strip them back to the B-pillar and remake the car so everything looks and works as it should with the steering wheel on the right.

It’ll cost you more than a Mustang would, but it’s impressive enough that even at $104,990 (plus $1000 for the bright yellow) it doesn’t seem overpriced. You couldn’t import and convert one of these yourself for less and it wouldn’t be engineered to HSV standard.