Champion ploughman does it again 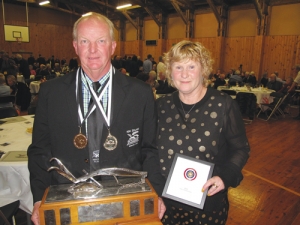 2014 champion ploughman Ian Woolley, of Blenheim, has again won the Silver Plough, sponsored by Case IH, and will represent New Zealand at the World Ploughing Championships in Denmark this September.

Woolley’s latest win means he will also represent NZ at the World Championships in UK 2016.

He is now arranging to freight his John Deere tractor, plough and parts to Denmark for this year’s event and will leave his gear there for the 2016 event in the UK.

Winner of the reversible plough class, sponsored by Farmland Fuel, was Malcolm Taylor from Putaruru. Second was Bob Mehrtens and third Ashley Seaton.

Taylor, who has competed at NZ finals for 11 years, has won this class for the last seven. He will represent NZ in Denmark and in the UK in 2016. He has a tractor in the UK stored with a family member, which is set up the same as his NZ tractor.

Winner of the vintage trophy was Paul Houghton of Gordonton, north of Hamilton. Second was John Stalker and third Alastair Rutherford. Houghton previously won in 2012 when the event was held at Cambridge.

Winner of the horse ploughing, sponsored by Rural News Group, was Fred Pilling of Hamilton. Second was Sean Leslie and third were Snow Cleaver and Doc Wilson.

Pilling won this event for the first time in 2014. He was also the winner of the Vern Bishell Trophy for the best presented horse team, including horses, equipment and contestant.

The Wiganwood Trophy was won by Lyle Parnham, the Fairhall trophy by Tryphena Carter and the WG Miller Trophy by Ashley Seaton.

The weather was cool, but fine, and there were trade displays, vintage machinery and craft stalls. Big crowds attended on both days.