So far so good this spring for Psa 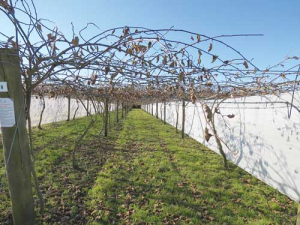 Psa has surprisingly been less active so far this spring.

Despite the wet weather, kiwifruit vine killing bacteria Psa has surprisingly been less active so far this spring.

Kiwifruit Vine Health (KVH) chief executive Barry O’Neil says while they have seen some Psa it certainly isn’t at the levels of previous years in most orchards.

“Obviously there are some exceptions and we have visited some properties where Psa is showing quite significant presence,” he says.

“But in general we are seeing less than last year and to some extent that’s a surprise because we would have expected the wet spring to support Psa disease symptoms.

“We are wondering whether the mild winter, when we had less frosts, may have resulted in less disease.”

The frost seems to cause damage to the plant, he says. Sometimes a hard frost will crack the vine and Psa takes advantage of the damage.

“That is one possibility,” he says. “The other possibility is that as growers we are becoming much better at managing Psa so it has become more routine for growers to do the right thing in their management of Psa, whether it’s the spray protection being used, how they manage their vines, etc.

“All in all I think at this stage it is a good-news story.

“In previous years we have seen that, after Labour Weekend, if we had a storm we have often seen significant leaf spotting in the green varieties and that sometimes results in flower infection.

“So it is still early days in what could happen this spring and we obviously still want growers to be active with their management of Psa
risk.”

The properties where Psa is showing significant presence are often those more “challenged”.

“It could be very low lying areas, it could be wetter areas; so the properties where it has been bad are where we have seen significant Psa in previous years.”