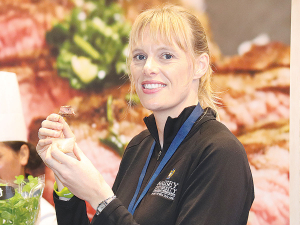 A new, tasty meat product could solve a problem for dairy farmers and yield them extra cash.

A new generation beef being explored by Massey University had Fieldays visitors queueing for samples.

Researcher Dr Nicola Schreurs, project leader for two years, spoke to the uni’s site visitors, inviting them to try the meat, some prepared as steak, some as a Vietnamese ragout (stew).

Schreurs says new generation beef is a way of using the dairy industry’s bobby calf surplus that would otherwise be slaughtered. She and her team have reared bobbies for a year to produce this new beef.

From a farm systems point of view, says Schreurs, rearing these animals to just one year helps by getting them off before their first winter and may be good for the soils on some farms.

And meat quality can be higher in younger animals.

“All things combined, this under-utilised resource out of the dairy industry has positives for farm systems and is likely to produce a high quality meat product,” she told Rural News.

At this stage, the trial is looking at typical animals from the dairy industry, the Hereford Kiwi cross. And Schreurs says they are now looking at heifers, analysing their quality and yield.

At slaughter the bobbies’ meat is quite red because of their outdoors pasture feeding. The collagen in the meat of younger animals is more soluble, making for tenderness when cooked.

New generation beef is still far from making it onto supermarket shelves and is still in the pilot stage, Schreurs says. But the researchers are busy pointing out the possibility of producing this meat.

They are also investigating meat processors’ possible interest and whether they see a market for the product.

But while this is all positive, Schreurs says the challenge for processors is that the animals are not high yielding. It may sometimes be better to raise the animals to 15 months before slaughter, allowing farmers to use the spring flush as feed.

Going by its taste, new generation beef has a great future.