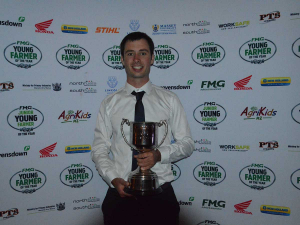 Jake Jarman, 23, not only took out the regional title and became the first competitor of the season named for the grand final, he also won the most points in all four contest strainers.

Speaking of his win, Jarman says he was overwhelmed to have come out on top.

“Being a first-time competitor might’ve played into my favour as I just didn’t know what to expect so I wasn’t too worked up about any one aspect, I just thought I’d give it a go, try my best and see what came of it,” he says.

The event was held at the Awapuni Racecourse in Palmerston North on Saturday 23 January, where eight contestants chosen from three district contests battled it out in a series of modules and time and points races.

A written exam as well as the FMG Young Farmer of the Year buzzer quiz at the evening show on Saturday night also tested the regional finalists’ knowledge.

With the contest based around four strainers – technology and innovation, environment, people, and food – Jarman says he was grateful to have been consistent across all four.

“Working to a time pressure and making sure you tick everything off that you could while still doing it to a high standard was the big challenge,” he says.

He says the head to heads were the most enjoyable part because everyone competed at the same time.

Jarman says he looks forward to creating a ‘rigorous training plan’ to prepare for the grand final in July.

The 53rd season of the contest was much awaited following the cancellation of the 2020 competition, the first time the event has been cancelled in its history.

Regional final convener Robyn Engels, a sustainable dairy advisor for Fonterra Farm Source, says it was fantastic to connect with the committee, contestants, sponsors and local supporters through the event planning.

“Palmerston North and the Manawatu Region in general is an agricultural hub. We have such a diverse region – from the university classrooms, to the research labs, to the land we farm – we couldn’t wait to mix this all together to give the contestants a challenge and the spectators an absolute show,” she says.

New Zealand Young Farmers chief executive Lynda Coppersmith says 2021 Young Farmer of the Year has so far been one of the fiercest seasons yet.

“We can’t thank all of our amazing contestants, conveners and volunteers enough for their resilience, hard work and dedication,” she says.

“The level of competition this year is absolutely outstanding. We have some seriously talented members in our ranks and it is a privilege to watch them all represent the food and fibre sector and grow as Young Farmers.”