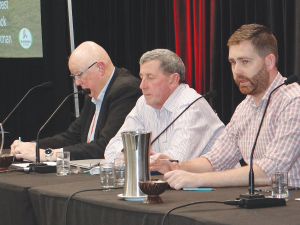 Rural contractors have challenged MPI and Federated Farmers over the management of Mycoplasma bovis.

He says a second round of M. bovis was being suggested on some Southland farms and contractors were no better off than the first time in knowing whether a farm was infected or not.

Kean added that using TracMap, contractors like him could visit three farms a day without direct contact with a farmer, raising the risk of spreading the infection. Taranaki’s Chris Satherley claimed that MPI had put contractors in a terrible position and if eradication was sought, the names of affected properties had to be communicated.

Federated Farmers general manager for policy and advocacy, Gavin Forrest, told the conference that all farms with infected herds were required to have signs on their gate and it was traumatic enough for farming families without the risk of victimisation.

RCNZ chief executive Roger Parton explained that contractors had to travel from farm to farm, so knowing which farms were suspected of having M. bovis would allow them to take appropriate measures and not expand the risk. Forrest said if contractors were washing down equipment between farms the chances of spread were virtually nil.

MPI’s Joe Stockman told the conference the primary sources for transfer were cow-to-cow contact and contaminated milk. He also claimed some farmers had not given a “sh!t” about keeping NAIT records, which had not helped.

Stockman added that 176 properties were under investigation for M. bovis, making it the most challenging biosecurity issue farmers had ever faced.

But he pointed out there were 22,000 farms nationally and fewer infected dairy herds were emerging and the disease was not moving into beef herds.

The conference was told farm biosecurity issues were not limited to M. bovis. Helen Slattery, who sits on a national committee dealing with velvetleaf, said some farmers had been driven near to suicide over the invasive pest.