No shear sheep a perfect fit 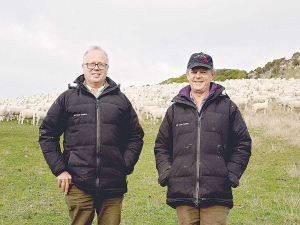 Shareholders Tim Chamberlain (left) and Andrew Heard are opening up Mt Cass Station on 20 November to allow farmers to see how no-shear Wiltshires perform in a low-input environment.

At a time of depressed wool prices, more and more sheep farmers are looking at reducing costs – such as shearing and parasite control.

With this in mind, Mt Cass Station will host an open day – on Friday 20 November – to give farmers an opportunity to see how no-shear Wiltshires perform in a commercial environment. The 1800ha hill country coastal property, near Waipara in North Canterbury, is farmed using organic principles. The farm is run by Sara and Andrew Heard and five other shareholders.

It is under this low-input system that Andrew Heard claims the Wiltshires come into their own. The breed’s inherent internal parasite resistance and resilience means they don’t need shearing, dagging or crutching – and they don’t get flystrike.

As Heard points out, all the jobs associated with running sheep are significantly reduced, which means savings in shearing, labour and agrichemical costs.

Mt Cass has been running Wiltshires for 12 years, after purchasing its first Wiltshire rams to put across the farm’s existing mid-micron ewes, along with some Wiltshire ewe lambs.

Since then, they have breeding and selecting and now run an even line of 8,300 Wiltshire ewes alongside their Wiltshire stud, which was established to meet a growing demand for their genetics. Mt Cass will be holding its first on-farm ram and surplus ewe lambs on 20 January next year.

Heard believes there has been growing interest in Wiltshires from farmers frustrated by on-going depressed wool prices and the work associated with wool production.

He says the progression to a no-shear flock is quite rapid and in the first-cross, the progeny typically has no wool on their belly – so no belly crutching is required. Within a couple of generations, Heard claims crutching, dipping and flystrike is eliminated and within three to four generations so too is shearing.

While they don’t produce wool, the Wiltshire are good meat producers, weaning 135-145% of Mt Cass’s hill country. Around 40% of the lamb crop is sold prime pre-Christmas at 16.5-17.5kg carcass weight.

Heard, a former fine-wool producer, says Mt Cass and its organic system is an ideal testing ground for genetics. He has been impressed by the Wiltshire’s ability to perform on the hill country without the support of inputs.

“I miss the wool,” he says. “But I don’t miss producing something that’s worth nothing and has a lot of associated costs, added stress and labour.”

Safety should be a key consideration for all on-farm activities, while not forgetting less commonly used areas like woolsheds.

Shearing not cut out