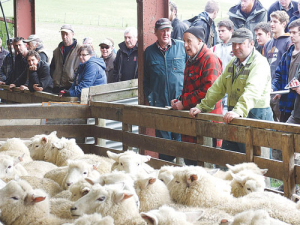 Progressive Livestock auctioneers run the surplus stock and plant auction at Telford following the takeover of the training operation by North Island-based Taratahi Agricultural Training Centre. A crowd estimated at close to 400, including 280 registered bidders, turned out for the auction.

Lincoln University's transfer of its Telford agricultural training operation at Balclutha to Wairarapa-based Taratahi Agricultural Training Centre has been completed, on the payment of a token $1 for the campus and other assets.

The transfer took effect on July 31 and was marked the following day with an auction of surplus stock and plant from the Telford farms, which drew an estimated 350-400 including 280 registered bidders.

Taratahi has taken over the campus and teaching facilities from Lincoln, and has taken a lease over the Telford farmland, totalling 921ha. Previously the Telford farm board retained a management role over the farms, but chairman Murray Pilgrim says it’s now stepping back to more of a governance role.

Managing the farms for themselves better suited Taratahi’s model, he believes.

Pilgrim says Taratahi has bought most of the plant and stock but there is still a lot surplus to be disposed of. He could give no figure for the amount raised, but was “really happy” with the way the auction went.

The new setup is in line with a discussion document the Telford farm board issued a year ago, arguing that the country needed one nationwide provider of farm training.

Pilgrim says the farm board wants to see the entire operation remain a viable unit.

Lincoln University will provide some technical support to ensure a smooth transition until the end of 2017.

The spokesperson added that all Telford staff have chosen to accept employment with Taratahi.

Taratahi and Lincoln had been negotiating the transfer of the Telford operation since 2016. While the commercial decisions regarding the sale were the responsibility of the two institutions, the legislation governing both institutions required ministerial approval for the transfer of any associated properties or leases.

On July 26, Primary Industries Minister Nathan Guy and Associate Minister Louise Upston announced their formal consent for the transfer of the campus assets, for the token payment of $1.

The ministers noted that the primary industries require an increasing range of skills and capability to support their growth.

In 2012 about 44% of primary sector workers had a post-school qualification, and that will likely have to increase to 62% by 2025.

Guy said Telford has a long-standing and valued place in primary sector education in the South Island.

“Taratahi’s decision to acquire Telford campus means the primary sector will retain access to nationwide onfarm training facilities with a focus on a range of practical skills the primary industries need.”