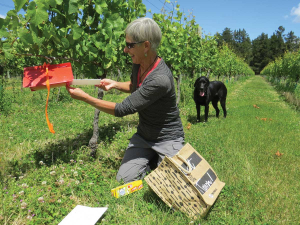 Mealybugs, a vector of the virus, have been a pest in New Zealand orchards for more than a century, in vineyards in Hawke’s Bay for many years, and are now seriously infesting grape vines in many parts of Marlborough. It was previously thought – or hoped - the insect pest wouldn’t survive the cold winters and harsher Central Otago climate.

In the workshop, growers were shown how to identify the two main species of mealybug affecting grapes - longtailed and citrophilus - where they can be found (usually the underside of leaves), and the threat to the local industry. That threat is primarily through mealybugs’ role as a vector of the incurable leafroll 3, but secondly because of the rejection of fruit at harvest due to the presence of insects and sooty mould.

Plant & Food Research Senior Scientist Vaughn Bell told growers that mealybug can live on various plants such as clovers, haresfoot trefoil, and hawksbeard, as well as grape vines where they over-winter under bark or on the roots. They emerge in summer, when all life cycle stages can be found on the undersides of leaves and along the main leaf veins, where they suck the sap. Juveniles, or crawlers, have no wings but are easily spread in the wind and, if infected with leafroll 3, will pass the virus on to the next vine they feed on.

Vaughn said the virus has led to the loss of whole vineyard blocks in Hawke’s Bay, and encouraged Central Otago growers to start planning a programme of identifying, marking and roguing vines showing leaf colouration associated with the virus (Spotting Leafroll 3 sidebox). BRI has funded the pheromone trapping programme across six sites throughout Central Otago, while a further 10 volunteer sites have been set up by growers through COWA to try to map the presence or absence of mealybug across all sub regions.

Vaughn said only limited results were available yet, and the cool start to the season perhaps delayed the appearance of the pest. However, the presence of populations of the pest were confirmed on at least two of the monitoring sites in different sub regions of Central Otago. Meanwhile, some locals believe mealybug is firmly established in parts of the region and probably has been for some time.

One viticulturist confirms he observed mealybugs throughout several blocks in Gibbston last year, both on properties he manages as well as neighbouring properties. “It’s clearly in the Cromwell Basin as well as in Gibbston,” he says. “I would suggest they are everywhere.” Several tonnes of fruit were discarded at harvest time as they were tainted by sooty mould, and one vineyard block had been withdrawn from organics transition so insecticide could be applied to get on top of the problem. He says other growers, vineyard managers and contractors should be more honest and open to conversation about infestations in the interests of sharing information and developing pest management guidelines for the region. “We’ve been dealing with a completely different beasty down here,” he says. “Mealybug is living in a different and harsher environment and, being so cold this year, it’s not a good example to base our control decisions on.”

Another viticulturist says he volunteered for the monitoring programme as some blocks of vines he manages were known to have the leafroll 3 virus, and he was conscious they would be at risk of the virus spreading if mealybugs were present.

Scientist and grower Marilyn Duxson, who is on the BRI Research Advisory Committee, is coordinating the distribution of pheromone traps through members of COWA. She says there’s been a general belief across the Central Otago region that mealybug isn’t there, so growers have avoided roguing vines with the virus.

But she began a roguing programme to remove virus-affected vines last winter, after “positive identification that mealybug was in the district”, and urges other growers to be far more vigilant looking for mealybug as well as virus signs, and tagging vines in coming months. She says the fact that many vineyards are organic and there hasn’t been widespread use of insecticides previously could be a good thing and mealybug may be managed so long as the virus threat is contained. “Start planning to remove those virus-infected vines and you will sleep easier at night,” she said.

Vaughn hopes more growers will volunteer to include their vineyards in the monitoring programme, now that BioGro has given express permission for the traps to go into organic registered vineyards. He emphasises that the results would be completely anonymous at all times.

BRI Viticulture Extension and Research Manager Len Ibbotson encourages all growers to look closely at their vines and fruit leading into the harvest period and to use fact sheets on the New Zealand Winegrowers website to identify mealybug or virus, taking particular note if a virus appeared to be spreading.

He says the message from experience in other regions is to use a “softer chemistry” approach to controlling mealybug. “We made it very clear that if you’re not seeing mealybug in your vineyard, then don’t spray,” he says. “Broad spectrum insecticides kill beneficial insects such as parasitic wasps, and it may be better to maintain a diverse habitat of groundcover species offering mealybugs alternative habitat and reducing the risk of virus spread. Insecticide use to control mealybug is one tool in a very large toolbox to manage the issues associated with the pest.”

The symptoms of Grapevine Leafroll-associated Virus Type 3 (leafroll 3) infection are quite marked on red wine varieties, with reddening in the interveinal area of leaves, especially in the latter part of the season, from veraison leading up to harvest. White varieties are also susceptible, although the symptoms are harder to identify and usually require laboratory analysis. Whilst vines may be virus-free at time of planting, all grape vines are susceptible to leafroll 3, which will ultimately cause reduction in fruit yield and quality.