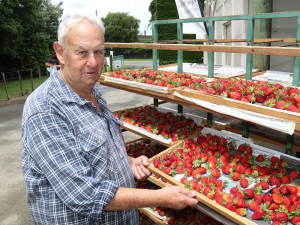 Horowhenua strawberry grower Kevin Donovan drying out strawberries in late December, which had just been picked.

It will take between six to eight months for commercial growers in the Horowhenua region to fully recover from the disastrous heavy rains that hit the region in the weeks leading up to Christmas.

In the space of 10 days, more than 300mm of rain fell in the area - three times the usual December rainfall total. Locals say they have never seen anything like this before.

The rain came at a critical time as vegetable and strawberry growers were trying to supply supermarkets for the Christmas trade. Many growers lost crops at this time.

President of the Tararua Vegetable Association, whose members include those in Horowhenua, says he's never seen anything like the rain that fell in December. Terry Olsen told Hort News that it's not uncommon to have a wet December. He says it's still too hard to estimate the exact cost of the rains.

Olsen is a potato grower and talking to other growers says it would seem that between 10 and 15% of the crop has been lost so far.

"the thing is that sometimes you think you have a reasonable potato crop but when you come to harvest and process them, many aren't fit for purpose," he told Hort News.

"So, there is always an impact that is far wider than you first visualise. You can't look at potato crop on the surface and say it's okay - unlike some vegetables. It's not until they're harvested that you get the complete picture."

Olsen says losing crops is one thing, but with the amount of rain they've had, the paddocks were so wet it was impossible to get machinery on to them to replant crops, fertilise and spray.

He says the rain is hard on crops, soils and people. The problem is compounded by staff shortages facing contractors, because insufficient skilled overseas workers are being allowed into the country. Olsenn says contractors are stretched to the limit.

He says the other problem in Horowhenua has been the lack of sunshine.

"Strawberry growers have been particularly impacted by this because their crops could not ripe," Olsen explains. "Prior to Christmas, there were a lot of dull overcast days and only recenly have we seen hot sunny days."

Olsen is hoping it gets to a stage when growers in the region can get a smile back on their faces.

Commercial growers in the Horowhenua region in the lower North Island are facing significant crop losses as a result of persistent and devastating rains over the last two weeks.