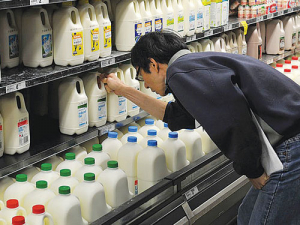 Milk processors in Australia, including Fonterra, could soon be slapped with a mandatory code of practice.

Agriculture Minister David Littleproud is backing a call by dairy farmers for a mandatory code to improve farmers’ bargaining powers.

“They want to know that if they have a contract dispute with their processor, there will be a mechanism in place to ensure their interests are safeguarded. They want certainty that there will never be another milk price crisis.”

A voluntary code of practice has been in place since July last year -- the industry’s response to address the power imbalance between farmers and processors.

ADF says before the code was introduced farmers had little protection from practices used by some processors.

The Australian dairy industry was rocked in 2016 by the collapse of its largest co-op, Murray Gouburn. Farmers were hit by a retrospective farmgate milk price step down that required them to pay back money they had already absorbed into their farming businesses. MG has since been sold to Canadian dairy giant Saputo.

Australian dairy farmers feel the risk remains the same and don’t want a repeat of the MG fiasco.

ADF says if success is to be measured solely by the strength of the code to eliminate risk, the current voluntary code needs strengthening.

“Some processors are not signatories to the code and there are no penalties enforced for breaches. How does this prevent a repeat of the milk price crisis?

“Farmers can take their business elsewhere if their processor isn’t a signatory to the code. But this is a problem in regions with only one monopoly processor. It is not a viable solution and the risk is that suppliers could once again be forced into hardship should the milk price crash.”

Littleproud is commending ADF for its leadership on the issue.

“I told them it was time to lead on a mandatory code and the ADF has stepped up.

“I know this was a difficult process for them and they’ve shown the courage to take their industry forward.

“Now that we have direction from the organisation representing dairy farmers across Australia, we can move forward. I agree with ADF that a mandatory code must cover the entire industry and improve bargaining power for dairy farmers.

“I will work with farm groups to get this code right.”

Australian Dairy Products Federation spokesman Grant Crothers says while the Australian Competition & Consumer Commission (ACCC) recommended the dairy industry introduce a mandatory code of practice, this would cost the industry rather than improve it.

He says it would add costs to be borne by participants along a finely balanced supply chain, including cost recovery fees and penalties for non-compliance with ACCC administration requirements.

“It will lead to businesses – farm sector and processor – becoming more risk averse, so limiting investment and stifling innovation.”

He says the current code of practice provides guidelines for dealing in good faith in milk supply negotiations between processors and farmers.

“We agree the existing code of practice needs to be stronger.”