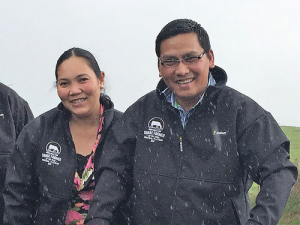 The 2017 Central Plateau Share Farmers of the Year, Carlos and Bernice Delos Santos, says entering the Dairy Industry Awards was one of the best career decisions they have made.

They were also the national runners-up.

They say they grew professionally and personally just from entering.

“You hear that so often from previous entrants, and the truth is, you really do,” Carlos said. “If we could enter again, we probably would.”

The Delos Santos are still share-farming on the farm where they won the regional title and have increased their herd size to 370.

“We are about to embark on our next adventure and will be milking more cows.

“We credit that progression to the awards. We learned it’s a lot easier to deal with bankers and potential farm owners/consultants with the knowledge we gained from the awards.”

The couple are this year regional managers in the Central Plateau regional committee, enjoying being able to encourage the next wave of entrants.

“This is our way of giving back to the awards and it is amazing to be involved in a memorable event to future winners,” says Carlos.

“We know what it’s like first-hand to start from nothing. We literally worked from the ground up, and we like to share and encourage other entrants to do the same.

“We knew just by entering that you got all these goody bags and vouchers and if you do a bit better then you start getting serious prizes. In the past, we would say ‘we want to own a farm’ but we never really had a plan in place to achieve that ownership.  Entering the awards made us put everything in writing and work it out.

The Delos Santos say the awards also made them realise how important their family is, enabling them to prioritise their children and the time they spent on them.

“Growing your business is one thing; being able to spend time with our three little children even though we are busy is priceless,” says Bernice.

The 2020 Hawkes Bay/Wairarapa Dairy Industry Awards Share Farmer of the Year winners Nick and Rose Bertram are no strangers to success.

Encouragement pays off for dairy manager