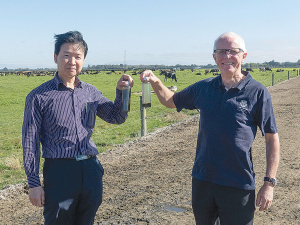 Lincoln University Professors Hong Di (left) and Keith Cameron show bottles of effluent, one raw and one cleared by the coagulant used in ClearTech system.

New research points to more advantages to the ClearTech dairy effluent treatment system being developed by Lincoln University and Ravensdown.

The system, unveiled in May last year, is designed to be installed between the dairy shed and effluent pond, intercepting and treating farm dairy effluent (FDE) with a coagulant to remove the solids.

With the solids removed, the result is clear water said to be of swimming water quality and at least clean enough to go round again as yard washdown water or be used for irrigation.

Ravensdown, Lincoln’s primary commercial partner in the venture, says that if every farm used the system it would save 42 billion litres of fresh water each year.

But the system also changes the concentrated residue which goes to the effluent pond to be eventually spread on pasture in the usual way, reducing its bacterial loading and changing its phosphorus content into a less reactive form. Research has now shown that could benefit river, lake and groundwater quality.

ClearTech is the brainchild of professors Keith Cameron and Hong Di, of Lincoln University’s Centre for Soil and Environmental Research. They say lysimeter trials have shown significant reductions in leaching losses of total phosphorus (TP), dissolved reactive phosphate (DRP) and E. Coli from ClearTech-treated FDE applied to pasture soil when compared with losses from untreated FDE.

“The reductions in DRP and E. Coli indicated that land application of the treated FDE would be less likely to cause adverse environmental impacts on water quality than the current practice of land application of untreated FDE, and this has now been confirmed by the lysimeter study,” said Cameron.

He said the research was not able to be disclosed at ClearTech’s original launch because the results had then to be formally published in a scientific journal, which has now happened.

The system is still in a pilot stage at the Lincoln University Dairy Farm  (LUDF), and more pilots are being planned or installed in Southland and Waikato.

The LUDF pilot consists of a large settling tank which receives the raw effluent. Ferric sulphate is mixed in as a coagulant which causes the solids to clump together in a ‘flock and sink to the bottom of the tank. Computerised pumps and valves then siphon off the clarified water to another tank for use in yard washing or irrigation while sending the thicker residue to the effluent pond.

Being acidic, the coagulant has a bactericidal effect and the clumping of the solids also physically smothers bacteria, significantly reducing the number of E. Coli in both the clarified and residue streams.

Di said the process also changed phosphorus into a stable slow-release form, less water-soluble and less reactive. “We’re not only recycling water, increasing the storage pond essentially so it can last longer, but also after the application to the land you have much less environmental impact from E. Coli leaching and phosphorus leaching,” he said.

“It’s not increasing other greenhouse gases and it’s not affecting other microbes in the soil.”

“We found there was no significant difference between pasture dry matter yield following land application of treated effluent compared to the untreated FDE, which indicates that these environmental benefits can be achieved without sacrificing current pasture production potential,” said Di.

There was a 99% reduction in the average DRP concentration of the ClearTech-treated effluent compared to untreated.

The ferric sulphate used as the coagulant is considered safe. Cameron points out that it is the same substance as given to people to treat iron deficiency, and both iron and sulphur are already common in soil. “We’re not adding anything new to the system.”

The greatly reduced volume going into the effluent pond also meant the pond was much less likely to fill up and force a farmer to spread it at unsuitable times, such as when rainfall would wash it into groundwater.

Cameron said they were often asked whether there were problems from the thicker slurry but it contains only 3% solids (compared with 1% solids in untreated FDE) so standard irrigation pumps and systems can still handle it.

Cameron said MPI regulations allow green water to be used to wash the yard but that carries bacteria and is smelly to use.

The Lincoln University Dairy Farm (LUDF) has been given an A-grade in a Farm Environment Plan audit, partly because of the ClearTech system doubling its effective usable effluent pond volume.

Auditor David Ashby told the recent LUDF February Focus Day that without addressing its effluent storage and some irrigation improvements, the farm would otherwise have a B-grade.

The A-grading is believed to put it in the top 10% of dairy farms in Canterbury and means it should not need another audit for three years.

Carl Ahlfeld, Ravensdown’s ClearTech Product Manager, says that effective increase in effluent pond volume is one of the potential bottom-line benefits available to any farmer who installs the system.

Ahlfeld, who was appointed in December to manage ClearTech’s commercial introduction, said there were five farms in Canterbury now ready to go with installation in the near future.