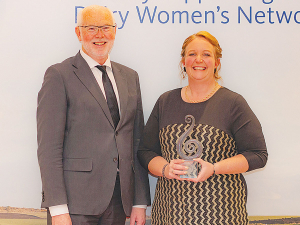 Trish Rankin after receiving her award from Fonterra’s Mark Cronin.

Working for a Māori corporation with its values of caring for land and people was a big drawcard for 2019 Fonterra Dairy Woman of the Year Trish Rankin.

The environmentalist, mother of four, teacher and farmer is, with her husband Glen, starting a third season sharemilking on a 143ha Parininihi ki Waitotara (PKW) farm milking 450 cows in South Taranaki.

Rankin says working for PKW fits well with their approach to farming.

“A big reason we came to work for them was because they care about the people and the land in quite a public way,” she says. Glen and their four boys aged six to 14 are Ngai Tahu and she had a synergy with those values through what she had learned in teaching.

PKW has 15 dairy farms among its primary industry ventures. It has a focus on kaitiakitanga (guardianship of the land), manaakitanga (care of present and future generations), whakapono (adherence to tikanga/value systems) and whanauungatanga/kotakitanga (belief in collective action with trusted relationships).

“We have worked for a number of different farm owners from mum-and-dad farmers through to the corporation…. The value of decisionmaking is really important to us.”

Every month a small sub-group of PKW hold kaitaki hui to talk about farm policy and perhaps learn a new karakia. Every quarter a whanau hui is held at a local marae.

“You learn all about the marae history, you might learn a new waiata and practice your mihi. I was already pretty good with all that, being a teacher and having lived in the Far North, but it is a great dimension to the job.”

Previously the Rankins were sharemilking in Hokianga where they won the region’s 2016 Sharemilker of the Year title. They farmed in a small community in north Hokianga with acitivities which contributed to the boys’ understanding of te reo and tikanga. They wanted to build on those skills.

Rankin says the Māori farming sector is working hard on developing the farm business side but is also developing people and land. “That is why it is coming ahead – three strings to the bow.”

Rankin teaches at Opunake Primary School but will be onfarm full time when calving starts in July. She has undertaken the Kellogg Leadership Programme this year with research on ‘how can a circular economy model be developed on a NZ dairy farm’ which she will complete shortly.

She is on the NZ Dairy Awards national executive and last year was selected as a NZ Climate Change Ambassador as part of the Dairy Action for Climate Change. As an active Dairy Enviro Leader (DEL) and member of the NZ DEL network, Rankin is also chair of the Taranaki DEL group.

She was raised a townie, her father was a policeman and she grew up in Christchurch and then Greymouth. Glen was also a townie but went farming in Canterbury in 2001. She taught and worked in the business side.

There were all kinds of adjustments to farm life: grocery shopping once a week, the amount of laundry, having to plan social life around milking and when on farm fulltime not having 15 other teachers to talk to.

“So your husband has to be your best friend but that’s really cool. We like that. I love it now. I could never live back in town. I don’t think my children would be quiet enough to live in town! They are so used to not having any neighbours,” she jokes.

Rankin only became actively involved in onfarm work about five years ago but now she is both a farm assistant and chief executive, having learnt to milk, drive tractors, feed stock and do fences and handle the health and safety and human resources tasks.

She says the life has heaps to offer. “Whether you want to milk and do something practical or do something with your brain in strategic thinking, there is always something you can do.”

Being a climate change ambassador has been “awesome”, she says.

“We have had heaps of information, so much so that climate change is probably as hard to understand now as when I signed up for it two years ago because it is so specific.

“The most mind blowing, life changing aspect was that the sentiment is what is important, regardless of the science.”

“Overwhelmed” was Trish Rankin’s reaction to being named Dairy Woman of the Year.

She went to the awards night in borrowed dress and shoes, sat at the back not realising there was a seat reserved at the front and had a carry-on flight ticket which could not fit a trophy and bottle of wine.

“It was quite surreal. When Mike Cronin from Fonterra got up and started talking about what Dairy Woman of the Year needed to be and how they had to be across a lot of things, active in the community, passionate about the environment – my sister tapped me on the shoulder and said ‘that’s pretty much what you do’. I quickly put my shoes back on.”

When her name was called “it was amazing and so exciting”.

The $20,000 prize towards professional development is “an absolute privilege”.

She felt guilty every time she had to take $500-$600 out of the business in the last few years for her Diploma of Agribusiness course fees.

“Taking money out of income to pay for study has never been an easy thing because you always have the next tractor that needs repairing or the next cows to be replaced.”

When Rankin stops teaching fulltime to do calving she will start making plans for her next round of professional development.

A new Regional Leader of the Year Award has been established by Dairy Women’s Network.