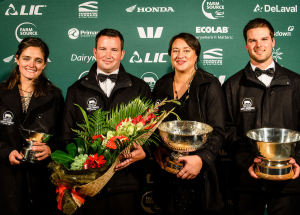 They three major winners shared prizes worth over $210,000.

Share Farmer head judge Kevin McKinley, from DairyNZ, says the Beazley’s impressed the judges with their resilience, team work and attention-to-detail.  “They are such a great team and complement each other with their roles on farm.”

The Beazleys, both aged 31, are 50/50 Sharemilkers for Neil Jones and Wendy Crow-Jones milking 330 cows on the 163ha Wellsford property.

The couple have entered the Awards twice previously and were third placegetters last year in the same category.  They believe in the Awards programme as a learning platform to network, benchmark themselves against others in the industry and learn more about themselves personally and their business.

Fellow Share Farmer judge Matt Richards, from Southland says a good example of their pasture management is the way they work with the Kikuya grass they have but are also trying to eliminate it at the same time. “They had a really good understanding of pasture and crop eaten and importance of it in terms of driving operating profit.”

The judges also noted that the Beazleys weren’t afraid to trial new things and were innovative around pasture species and management and their use of technology. “Colin uses a drone to check on the cows and has even delivered a coffee by drone to a staff member working down the back of the farm,” explains Matt.

Judge Jacqui Groves from Westpac noted how strong Colin and Isabella were in their community involvement and leadership. “They have awesome relationships with the people in their local community and are fully immersed in many activities, from Plunket to St John’s to footy and badminton.”

The Beazleys impressed the judges with their use of social media to ‘spread the good word about dairy farming’, and their strong family values and attention-to-detail in all areas of their business stood out.

“Everything was well thought-out and well-planned.  They are super organised and hold their staff in high-esteem.”