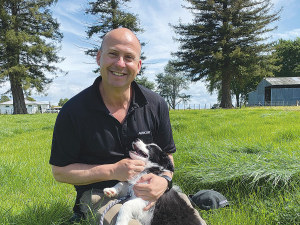 Whether your pastures are starting to open up due to insect pressure, hard grazing or dry conditions, undersowing into existing pasture is a cost-effective method, according to Agricom product development manager, Allister Moorhead.

He says as a result of climate change, farmers are seeing intensified seasonal weather trends, where summers are getting hotter and droughts are becoming more intense.

“When pasture gets put under stress from hot, dry conditions this leaves it vulnerable to insect pressure and the risk of pasture opening up, which can create an opportunity for weed grasses and hard-to-kill broadleaf weeds to emerge and impact pasture quality,” says Moorhead.

In a dairy system, summer grasses don’t convert to milk production well and are a risk to the farm’s overall output, he says.

Undersowing is the ideal solution to increase plant density, lengthen the life of the pasture and provide additional productive life to a declining pasture. The practice of undersowing, where ryegrass seed is drilled directly into damaged, old or declining pastures without spraying, is now a common practice on many dairy farms.

The choice of species and endophyte for undersowing is crucial to achieve both strong gains to production over winter and spring, and also have these effects last for more than eight months. A tetraploid hybrid ryegrass with endophyte, such as Mohaka AR37, is a premium option because it offers affordable undersowing and is rapid to establish in pastures with other existing species growing.

Perennial ryegrasses may not always be as suitable because of their slower establishment.

“With the endophyte AR37, it’s well suited to the widest range of environments and insect pests. Tetraploid grasses are quite susceptible to insects as they’re highly preferred and AR37 supports resilience really well in these conditions.”

The key to this variety’s success is its combination of fast-establishment, strong early autumn and early winter growth, and enough broadness of leaf to be very clearly seen in amongst an existing perennial pasture. It will contribute to the growth cycle at a time when existing pasture struggles, mostly winter and early spring.

Moorhead says there are currently good supplies of Mohaka, though the success of the variety over the last 12 months has added to unusually early demand, and anyone considering undersowing is urged to plan and order sooner rather than later. It will also be available with AR1 endophyte, post-harvest 2022.