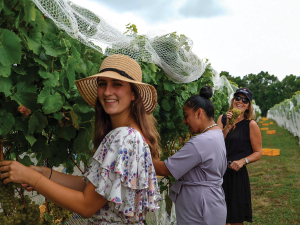 While this article focuses on the three main wine growing regions, other smaller regions experienced similar conditions, with all praising the fruit quality and looking forward to the wines in bottle.

By nearly all accounts, Hawke’s Bay has had a phenomenal harvest and 2019 is very likely to rank as one of the vintages of the decade - if higher praise is not bestowed on the wines in the future.

Just ask and most winemakers will tell you this has been something special. “Where do I start?” said Sileni’s irrepressibly effusive Senior Winemaker Cairn Coghill. “It’s been an outstanding vintage from start to finish. Unusual in that from the first Pinot Noir to the last Cabernet Franc and to the Pourriture Noble it’s been nice and smooth and we’ve been able to make the right decisions. It’s just added to the expectation of the vintage.”

And while it was clear to many, just as harvest got under way, that this had the potential to be a great vintage, the early season indicators were nothing to write home about. Some growers in cooler Central Hawke’s Bay reported difficult conditions, even into the summer.

“We had to work hard through some challenging weather in spring,” said grower Ian Quinn who, with wife Linda, runs Two Terraces vineyard in Maraekakaho. “But the weather patterns really switched gear in January with some exceptional warm, dry weather extending right through into autumn. We were able to harvest every block at its optimal ripeness, with no weather pressure.”

“2019 is one of those rare Hawke’s Bay vintages where all of the wide range of varieties we work with, from aromatic whites to Chardonnay and full bodied reds, have all produced outstanding wines,” said Te Awa winemaker Richard Painter, pointing to Chardonnay and Cabernet Sauvignon as “real highlights”.

He said the Merlot produced sweet fruit reminiscent of 2008, that aromatic whites, Syrah and Cabernet France were “beautiful”, Pinot Noir was “stunning” and that this year saw their biggest lot of handpick Chardonnay.

“It’s wickedly exciting for everyone across Hawke’s Bay,” he added.

Last words should probably go to Craggy Range’s new Chief Winemaker Julian Grounds in his first Hawke’s Bay vintage. “One of the most iconic [vintages] for both Craggy Range and me personally,” he said. “With a vineyard now reaping the benefits of vine age resulting in some of, if not the most dynamic grapes we have ever been fortunate enough to grow and the wines reflect this. I cannot imagine being greeted with more exciting material with which to attempt to craft wines of presence that will hopefully state their presence in the global wine timeline. Truly the most amazing experience of my career to date.”

Yields were down, but quality was up, with winemakers claiming this was a dream vintage after a couple of difficult years.

And the two months of drought exacerbated those yield issues.

“People’s access to water through that drought period in January and February determined final yield numbers. Our vineyard crews didn’t have to do much  in terms of thinning of Sauvignon Blanc this year through the growing season. In some places, they (yields) became lighter and lighter because of that drought effect.”

She says fruit from blocks that were water stressed were affected.

“In the vineyard, the fruit had much lower acidity levels at lower sugar levels. Whether it was drought affected or the very hot summer, we are not sure, but the wines don’t have as much acidity as they normally would have. While we will make some very good Sauvignons with good palate weight, I am not sure they will have that striking acidity we are used to.”

Brenton O’Riley, Giesen’s grower viticulturist, agrees saying there were a few blocks that were under water stress, which affected wine quality.

“But all in all, everything in the tank looks great. Probably not as much aromatics as the winemakers might like, in terms of thiols, but they have good texture and palate weight.”

If there is a standout variety from Marlborough this year, it is Pinot Noir.

James Healy from Dog Point says in his career as a winemaker, he has never seen Pinot fruit of the quality he saw this year. “It was the best condition I have ever seen, from anywhere, not just Marlborough.”

With much smaller berries, fruit flavour and colour was intense, Morrison says.

“Because of the hot summer, we were thinking the Pinot crops might have been a little more on the thin skin side, rather than as intense a flavour profile. But we saw the complete opposite. Thick skins and intense colour and flavour.”

Vintage 2019 was extremely early for Marlborough, with some wineries finishing harvest on a date they would normally be gearing up to start. Just about all got Easter off, and having such a long drawn out autumn meant fruit could be picked at optimum levels, without any weather pressure.

“We were able to get the fruit in when it was ready,” Lane says.  “We didn’t have a 150 mm rain event hanging over our head. We were pretty happy about that.”

And going by the comments, some of the wines to come from 2019 will be exceptional.

The Central Otago growing season was “bookended by frosts,” and “not without its challenges,” said Central Otago Winegrowers ‘chairman Nick Paulin.

“From a regional perspective, we were lucky to get through the October frosts – a week later and it would have been devastating.”

Spring was cool and wet, with November rainfalls well above average and unseasonal snow on the ground in the Gibbston valley in November. December flowering was patchy and drawn out across the region due to the cool temperatures and rains, with Alexandra being the subregion least affected by uneven fruit set.

By Christmas the weather had settled but there was high disease pressure (powdery mildew) through into early January, however this was mostly well managed throughout the region, said Paulin.

“People are understanding that better, recognising the risk and spending extra time and putting the work in to stay on top of it,” he said.

The remainder of the growing season was cool, but ended with an “Indian summer” allowing fruit to ripen normally, starting with grapes for bubbles and Rosé in mid-March and the bulk of the fruit coming in through April.

Paulin expected the harvest volume across the region to be on average or slightly higher, augmented by new plantings coming on stream.

Owner/operator and viticulturist at Viticultura, Timbo Deaker, who contract manages properties throughout Central says the late rains which arrived right before harvest time increased berry size at the end of the season and saved growers from what was looking to be a leaner crop. “I’d be bullish to say Central Otago will be one of only two regions who will come in with above last year’s tonnage.

“This year felt like a great celebration on both quality and quantity,” he said.  “It’s very rare to see the winemaker and the grower happy … this year we got both.”

Some vineyards saw the effects of larger berry size in wines which lacked a bit of concentration, but Deaker said the wines were mostly of high quality, with good aromatics and tannin structure.

Grape Vision owner and Mt Difficulty viticulturist James Dicey described the 2019 vintage as “extremely variable, one of contrasts and many different phases of weather.
Pretty much everything that could happen in a year did,” he said.   Growers were stretched with a record number of five consecutive frosts around harvest in April but grapes were sufficiently ripe to be unaffected or harvested for Rosé, he said.

Valli Wines general manager Grant Taylor was “very excited” by the cooler vintage which he described as a “stellar year for white, and it probably couldn’t be better.”

The coolish vintage had made subregional differences “very, very clear,” he said. Final volumes were down about five percent across his Central Otago vineyards - whereas in the Waitaki Valley which harvested only about one tonne of Pinot Noir per hectare, the tight small berries had produced wines he described as “amazing.”

Brian Bicknell is carfully watching the shifting landscapes of hospitality around the world, hoping to gauge the strength of Mahi's markets.