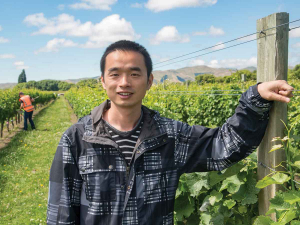 Understanding the influence of weather conditions on yield formation at critical stages of Sauvignon Blanc grape growth allows more precise yield predictions to be made.

Junqi has led a three-year project to develop a new model for predicting grapevine yield in cool climate Sauvignon Blanc by studying phenology, bunch numbers, berry numbers per bunch, berry mass, bunch mass, vine yield and meteorology records. A PFRM team has used a long-term Sauvignon Blanc field trial in four Marlborough vineyards to quantify the correlation between weather conditions during key development stages, such as bunch initiation and flowering, and the yield of Sauvignon Blanc grapes grown in a cool climate.

“Incorporating the correlations between yield components and weather conditions into plant models will likely improve our yield prediction for grapevine,” says their report. Named ‘Quantifying the seasonal variations in grapevine yield components based on pre-and post-flowering weather conditions’, it was recently published in OENO One, a vine and wine open access journal owned by the International Viticulture and Enology Society.

“We found daily maximum temperature played a critical role in inflorescence initiation, while both daily maximum and minimum temperature played essential roles in berry number and berry mass,” the report says. “Radiation and rainfall account for extra variation in yield components besides temperature.” The statistical model explained 60 to 85 percent of the seasonal variations in bunch number, berry number, berry and bunch mass, and yield per vine.

The research incorporates much more data than the previous yield prediction model, developed in the early 2000s, which determined potential yields based on temperatures over fixed time intervals in the initiation and during flowering periods, from December to January. Junqi says being able to anticipate the variation in bunch number per vine in advance of pruning gives growers the option to change the number of buds being laid down at pruning, to minimise seasonal yield variation.

Junqi joined PFRM in September 2016, having studied as a meteorologist and plant eco-physiologist, with strong emphasis on quantitative plant modelling, at China Agricultural University. He did his PhD on plant plasticity at Wageningen University in the Netherlands, then switched to grapevine modelling to work as a postdoctoral researcher at the Institute of Vine and Wine in Bordeaux, France.

The full report is at doi.org/10.20870/oeno-one.2020.54.2.2926. For more information on the yield prediction model, see VineFacts issues 28 (17 April 2020) and 29 (23 April 2020). The yield monitoring and modelling work over the past 15 years has been financially supported by the New Zealand Ministry of Business, Innovation and Employment, New Zealand Winegrowers, Marlborough Research Centre and PFR.

A new agreement between wine education and science providers “paves the way” for research and collaboration, say those behind the move.

Calves gain more weight in less time with probiotics included in their diet, a trial conducted by Agrifert has found.