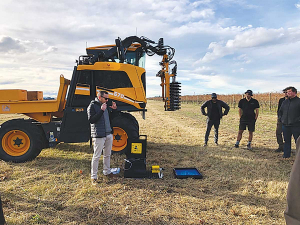 The NZW Biosecurity team presented a range of workshops around the wine regions in 2019.

2019 was a busy year for the Biosecurity team at New Zealand Winegrowers, with post-border BMSB finds, a fruit fly response, continuing readiness work for BMSB and Xylella fastidiosa, import health standard and the Biosecurity Act reviews, our member engagement programme and the launch of the Biosecurity Business Pledge just a few of the things the team has been involved in this year.

2019 kicked off with the news that a single BMSB had been detected in Glenfield, Auckland, with no known pathway of entry. Biosecurity NZ and the BMSB Council (chaired by NZW) launched an investigation using traps, a detector dog team and a public awareness campaign to ensure no further bugs were present. During the 2018-19 high risk season, a total of 212 live BMSB were intercepted either at the border or post-border, prompting changes to treatment requirements for containers and vehicles, machinery and equipment.

During February, a single Queensland fruit fly (QFF) was detected in a trap in Devonport. This was followed by more finds of QFF in Devonport and Northcote, as well as Facialis fruit fly in Otara. The response was escalated to organism management, and fruit trees in the controlled area were baited with insecticide to kill any fruit fly populations. Providing no further flies are found, the response should close down soon.

2019 saw some new sectors sign up to the GIA deed for biosecurity readiness and response, with Deer Industry NZ and Aquaculture NZ becoming part of the government-industry partnership. More than 85 percent of primary industry is now represented in the GIA, reflecting that industry is taking biosecurity seriously.

NZW chairs the Xylella Action Group and is leading some readiness work for the bacterial pathogen Xylella fastidiosa, which will likely result in an Operational Agreement being developed with other potentially affected sectors. A literature review has been completed, and a workshop was held involving industry sector representatives, scientists and representatives from MPI and Department of Conservation. The next step will be to develop a response plan for Xylella and NZW is currently involved with the group tasked to scope the response plan. At the Bragato conference in 2019, NZW also hosted a plenary and workshop session to promote awareness of Xylella fastidiosa to members.

The Biosecurity Act review was initiated this year with industry consultation workshops happening throughout the country. NZW attended two of these and is part of an industry reference group which will engage with MPI on a regular basis. Some of the key focus areas of the review are biosecurity system funding, compensation settings, on-farm biosecurity and GIA/partnerships. Several import health standards have also been reviewed this year and NZW have made submissions on the Offshore Facilities standard (for plant germplasm imports), the Prunus import health standard (as future Vitis import requirements are likely to be similar), the Vehicles, Machinery and Parts standard and the Sea Containers standard (these last two contain new measures for managing BMSB risk).

The Biosecurity team hosted several biosecurity-focused workshops throughout the wine regions in 2019 and would like to thank everyone who attended and participated. A key focus this year was the ‘Being a Biosecurity Champion’ programme where the Young Viticulturist of the Year competitors carried out a biosecurity site assessment of their home vineyard. The finalists were then tasked with developing a biosecurity plan for their site and presenting it as a business case during the competition.

The Biosecurity team also teamed up with Sustainability to launch the NZ Wine Kaitiaki group on Facebook. The group page provides updates to members and other wine industry participants about what is happening in biosecurity and sustainability, and we encourage members to join up and use it to pose questions or post related items that may be useful to others.

A pilot Biosecurity Week programme was held in late October, with almost 150 members completing an online quiz focused on wine industry biosecurity. The average score was 75 percent which was great to see. A biosecurity response workshop was run in Hawke’s Bay, using the scenario of a BMSB incursion in a vineyard to walk through what would happen in a response. After that workshop, two Hawke’s Bay members have volunteered to undertake further formal response training through MPI and to be key points of contact for NZW in the event of a response in the region.

31st October 2019 marked the launch of a new national biosecurity initiative, the Biosecurity Business Pledge, giving New Zealand businesses a framework to become part of the biosecurity team of all New Zealanders protecting New Zealand from unwanted pests and diseases. NZW has signed the Pledge as a supporting partner and encourages member businesses to consider signing up too. Businesses that commit to the Pledge are agreeing to integrate proactive biosecurity practices into their business activities and supply chains, which is good business risk management. More information is available at thisisus.nz/biosecuritybusinesspledge/ or by emailing This email address is being protected from spambots. You need JavaScript enabled to view it..

We wish all of our members a very Merry Christmas and Happy New Year, and remember to keep an eye out for BMSB or anything else unusual in and around the vineyard – don’t forget to Catch It, Snap It, Report It and call Biosecurity NZ on 0800 80 99 66.