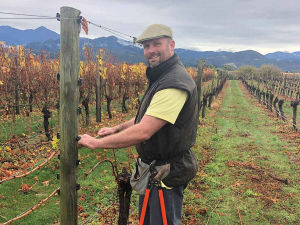 “I have had growers tell me that they were pruning before harvest finished, for the first time ever. It’s a great example where the results of past research were readily available for growers, in this case, reducing uncertainty where a change from normal practice was required.”

When New Zealand’s border closed due to Covid-19, BRI sourced relevant research for a fact sheet detailing options for early and later pruning, and around converting to a combination of mechanical and spur pruning.

The document includes findings that pruning cool climate Sauvignon Blanc immediately after harvest can extend the pruning season by as much as 25 percent. It also refers to Vineyard Ecosystems Programme trials showing spores for grapevine trunk diseases (GTD) are lower earlier in the pruning season.

“The findings show that you can prune in early autumn with no increased risk of GTD infection, if there are no rain events.” However, prompt protection of pruning wounds is still necessary, and sap flow may displace initial applications.

Len says the pruning research put into action this winter is an important validation of the importance of research to viticulture. People are “playing around” with their own versions of early pruning, spur pruning conversion, and “looking for shortcuts along the way”.

There’s also been a lot more talk around mechanisation and converting to spur pruning, although less appetite for that amongst Sauvignon Blanc growers, says Len.

Berakah Vineyard Management began pruning Marlborough vineyards in mid-April, putting the company three weeks ahead of usual, despite labour constraints. “We are very confident we will finish our pruning on time or potentially a little earlier than in the past,” says Viticulturist Logie MacKenzie.

Berakah have tested early pruning over the past five years – “out of necessity on naturally wetter blocks” - by staging work on single blocks to ascertain impacts on bud burst, flowering and yields. The results of those trials – showing very little or no impact on Sauvignon Blanc bud burst or crop levels - gave them confidence to kick-start pruning just after Easter this year, as little as three weeks after harvest.

Covid-19 border closures locked experienced Recognised Seasonal Employer scheme (RSE) winter pruners out of the country, but Logie says the contract gangs they use were able to tap into summer RSE staff who stayed in the country and were able to move between the regions.

However, those unseasoned pruners, along with a new Kiwi workforce, are bound to be slower than the usual teams, he says. “It can take two to six weeks, or more, to get up to speed on pruning or wrapping, and longer to get fast and maintain quality.”

By 20 May, Berakah had cut and stripped 40 percent of its blocks, and was around 15 percent of the way through its wrapping programme. They had also managed the conversion to Klima stripping for a couple of clients, driven by the desire to save on labour costs. “That is becoming more and more prevalent as the minimum wage goes up,” Logie says, noting that the cost of conversion can be saved in the first year of Klima stripping, “saving money from year two”.

OPINION: It's time for some real and fast action around allowing more seasonal workers into the country to help power NZ’s all-important agricultural and horticultural sectors.

New Zealand kiwifruit growers are nervous about having enough people to work in the industry during the coming months, according to grower organisation NZKGI.

Julie South, whose company VetStaff specialises in recruiting veterinarians, says there is a shortage of vets in New Zealand and that this has been compounded by Covid-19.