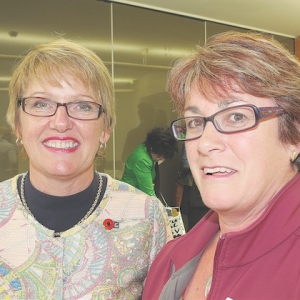 A CHANCE to see at first-hand the employment opportunities in the primary sector proved a hit for some 40 secondary teachers from the greater Wellington and Horowhenua regions.

One teacher described the day as an “outstanding initiative” and another an “inspirational day”.

The day-long trip saw careers advisors, science and commerce teachers visit a sophisticated asparagus farm near Levin and a high-tech dairy farm near Feilding. And they visited a Massey University sheep and beef research farm and the Agricultural Greenhouse Gas Research Centre at Palmerston North. At day’s end the teachers met informally at Parliament with the Associate Minister for Primary Industries, Jo Goodhew.

The trip was organised by Rural News reporter Peter Burke and DairyNZ industry education facilitator Susan Stokes. It’s the second year it’s been run and the demand for seats meant a waiting list of teachers wanting to go.

Massey University chancellor and former Landcorp chief executive Chris Kelly went along to give an overview of the primary sector and to highlight the huge range of highly paid jobs available in the wider agri-business sector.

Cheryl Robb, a teacher from Tawa College, says the trip was of great value and widened teachers’ views to see the jobs on offer. “Coming from a city like Wellington you’re not exposed to what’s available in the agricultural and horticultural industries, but… we now know what to recommend to our students.”

Goodhew told the group it’s important that people promoting careers in agriculture speak with enthusiasm and passion about the sector “to form a picture in the minds of young people of the exciting jobs available in it and that a lot more people are needed in the sector.”

But to get these jobs, some level of training is now necessary.

“People should be encouraged to think about what they might do in their spare time [and]… for a job that’s fun, exciting and well paid,” she said.

Four of the best

FOUR YOUNG people on the trip – three recent graduates and one undergraduate – told the teachers about the job prospects in agriculture and their own stories.

Sam Tennent, now LIC’s farm solutions manager in Whanganui/Rangitikei/Northern Manawatu, opted for a bachelor degree at Massey University as fitting around caring for her baby. She studied veterinary technology with elective papers in production animal/agribusiness. This helped her get the job she was looking for when she left university.

“The career in agriculture is fantastic. My role is flexible – almost self-employed – but with the support of the company. I’m out on the road, organise my own diary and plan my own days and weeks within reason.”

Brigitte Ravera, with an agricultural science degree from Lincoln University, is heading to Invercargill as a trainee consulting officer on a DairyNZ scholarship. She has her heart set on farm ownership.

Ravera had to work at convincing her father about her plans for a career in agriculture and didn’t at first reveal her goal of being a farmer. Instead she told him about the science she would do, and he has finally accepted her career choice.

“The number of job opportunities has been immense,” she told Rural News. “I had a job before I was halfway through my last year of uni. Every year since starting uni I’ve been offered a full time job on a farm.  There are plenty of scholarships out there and nowhere near enough graduates to fill all the jobs.”

Ravera enthuses about the financial incentives, the lifestyle and the independence that goes with jobs in the primary sector.

A new research winery in the heart of New Zealand’s vine country will be a “drawcard” for international researchers, says MJ Loza.