Prado proves not all 4WDs have gone soft on the road 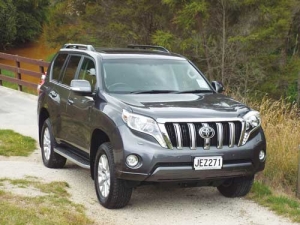 The 2016 Land Cruiser Prado has stayed true to its roots.

When it comes to four wheel drives the ubiquitous Toyota Land Cruiser has been around for 60 years, and the Prado variant for the last twenty.

Recently SUV has become the by-word for a new class of vehicle, but has also given rise to a new term called "soft-roader" for vehicles that strive, but don't really live up to the four wheel drive (4WD) moniker.

The 2016 Land Cruiser Prado has certainly stayed true to its roots, and puts established ability to the fore while introducing a host of new features to keep it bang up to date, and indeed, ahead of the pack. First big change, and also seen in the new Hi-Lux is a the new 1-GD-FTV diesel engine, that although losing a few cubic centimetres over its predecessor, gains a host of refinement in smoothness and quietness, but more importantly makes 10% more torque over a wider rev range. Indeed 805 of the maximum available is generated at just 1200rpm.

Having this 'get up and go' mated to a new slick six speed auto transmission means it's capable on the road, especially in the quiet stakes, but also has the ability to cover ground quickly without any fuss. Indeed it's very easy to find oneself besting the speed limit by quite a lot, as a pre-conceived idea of the noise required to hit the 100, means you push the 'loud' pedal more than is actually required.

On the road it travels like a 4WD, and will never handle as well as a hot hatch, and at 2.3 tonnes kerb-weight can exhibit a little body roll, but it's not alarming. This is probably helped by a system called KDSS that uses hydraulics to adjust the front and rear anti-roll bars to keep things on an even keel.

Going off-road shows the Prado's heritage, and shows you what 4WD is really all about, and not just getting over big kerbs on the school run. Excellent ground clearance combined with good attack and departure angles, means that if you need to go off road then there isn't much better out there. A host of additional features such as Hill Start Assist, Down Hill Assist and Active Traction Control do as they say on the switch and combine with the root systems to take control in the rough and adopt the adage of the old four wheel drivers who tell you 'keep your feet off the pedals'.

In addition Multi-Terrain Select sets the vehicle up for all surfaces from soft sand to hard rocks or scree, and combines with a four camera Multi-Terrain monitor to allow you to pick your route over the rough stuff, whilst Crawl Control offers very slow speeds, and Adaptive Air suspension allows different ride heights

Bowing down to the need for creature comforts in the 21st century, the Prado isn't light on features with fine grain leather seats, powered sunroof and rain sensing wipers. Smart key entry makes for a tap on the door handle for entry and lock up, and a centre console mounted cool box keeps your non-alcoholic drinks nice and cold.

Second and third row passengers get to sit on cow hides too, and their creature comforts include a 9 inch DVD system, and controls for heating and power to drive phones and tablets. Seven seats comes with a compromise in that whilst the third row is roomier than most it steals any useable luggage space. Getting to that space is also for the smart driver, as although the upper glass portion of the rear hatch lifts upwards, the main door swings in a horizontal arc, a trap for those who don't read operators manuals.

As well as being a good off-roader, the Prado is also a good tow vehicle for horses or boats, probably because of its decent kerb weight that means the towing vehicle is the boss, and is capable of pulling up to 2.8 tonnes.

In summary, Prado does what it's always done, with an ability to take the tough stuff in its stride, and in doing so leads to the phrase "not all 4WD's have gone soft".

Bringing a slice of Gotham to Grey Lynn and Greymouth

With the compact SUV sector making up 20% of the total SUV market, it’s not surprising to see Toyota launching a new model to claim its share.

With utes commanding an increasing share of the new vehicle market, a couple of accessories from Airplex will help make life easier and much safer.