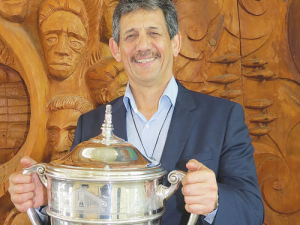 Kingi Smiler with the Ahuwhenua Trophy.

Māori dairy farmers are being urged to enter the 2018 Ahuwhenua Trophy for dairy.

The Ahuwhenua Trophy, now in its 86th year, is competed for annually, alternating each year between dairy and sheep and beef farming; the 2018 competition is for dairying.

Ahuwhenua Trophy management committee chairman Kingi Smiler says it is a great opportunity for Māori to take up the challenge and enter.

Entrants benefit from having a group of expert judges come and work with them to give them a good idea about what sort of progress they are making on their farms. It’s also great for those who are at the pinnacle of their operations to show other Māori farmers what they are capable of doing.

Smiler says getting farming practices aligned in such a way that they care for the environment is critical for New Zealand.

He says NZ has probably been too slow in taking up the challenge of balancing farming practices so that the environment is properly cared for. And unless the industry itself takes up the challenge, others will force farmers to do things and some won’t cope and will go out of business.

He says the entrants, finalists and winners of the trophy have all played a part in growing the legacy of Sir Apirana Ngata and Lord Bledisloe who inaugurated the competition.

“They wanted to train our people to ensure they were able to build sustainable practices for their business over time, the objective being to sustain themselves through the generations.

“These principles are as important today as they were then because of the water quality issues; and because the country hasn’t been taking care of the environment it has become a problem that needs to be addressed.”

Smiler says training is fundamental to that, and not enough is being done to make sure everyone working in the dairy industry understands that and is trained to apply those practices better.

Mackle says Māori values fit well with DairyNZ’s focus on a sustainable, competitive profit based system -- making a profit out of the actual business rather than relying on capital gains to make that profit.

Mackle says DairyNZ has been involved in the Ahuwhenua Trophy competition for ten years and that his organisation has gained a lot by being involved.

Entries close on November 24 and entry forms and other details are at www.ahuwhenuatrophy.maori.nz

The winner will be announced at a function in Christchurch at the end of May 2018.