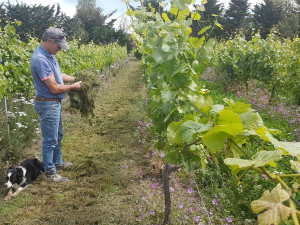 When Amisfield Vineyard Manager André Lategan began his subsurface trials 12 years ago, he was focussed on getting the vine roots to travel beyond the berm to “utilise more of the soil”. That resulted in less weeds undervine, and good greenery growth beyond it. In the years since, André has moved irrigation to the midrow, where the lines are buried just 5 centimetres deep, to ensure clover planted as a summer cover crop can also access the water.

That’s been a fantastic way to mitigate the reduction in yeast assimilable nitrogen (YAN) the company experienced after converting to organics five years ago, says André. “We opted for clovers to see if we could fix nitrogen biologically and that has worked very well.” The subsurface irrigation blocks, with their flourishing midrow clover, have far betters YAN levels than the rest of the vineyard, he says.

Amisfield has 7 hectares in subsurface irrigation, and plans to do another 8ha this season, following the 5cm deep midrow model that has served them so well, says André. He admits there have been problems along the way, including roots pushing into the pipes, but all new developments will use copper impregnated pipe to resolve that issue. Innovation often comes with setbacks, says André, who won’t let them stand in the way of subsurface. “The advantages are too great.”

Sharing the splendour of Central Otago has been key to an attraction campaign for the 2022 grape harvest.

A series of calf rearing expos are being planned over the next months by Dairy Women's Network.